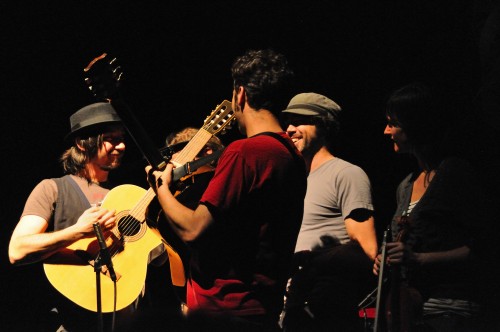 Patrick Watson set an intimate mood in the 930 club Tuesday night, starting their set in the dark. Five players all together were onstage- Patrick Watson singing and on piano, Robbie Kuster on drums, Mishka Stein on bass, Simon Angell on guitar and Melanie Belair on violin.The Montreal-based band is on tour now opening for Andrew Bird, in support of their latest release Adventures in Your Own Backyard, which came out in Canada April 17th, on Secret City Records/Domino. 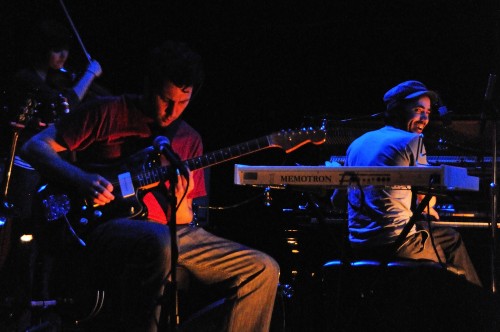 Eventually the stage was lit, but softly, making it feel like you could be in the band’s living room, or back yard. Watson’s vocal delivery is delicate for the most part, lilting and floating amidst tinkling piano or softly strummed guitar, violin tremelos. In livelier moments the band had an almost circusy feel, like a gypsy carnival, though still subdued.  To take things to an even more intimate place, the band gathered around one mic in the middle of the stage and played a couple of songs in an old-timey radio way, including the sweet, tender “Words In A Fire.” 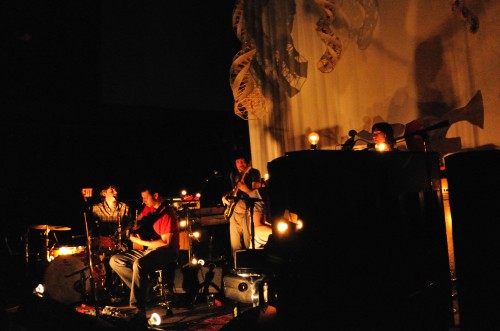 Highlights of the set included the spooky, ethereal “Quiet Crowd,” the bouncy “Into Giants,” with its lovely layered vocals, and the Spaghetti-Western feel of “Adventures in Your Own Backyard.”   The band closed their set with a dedication to the recently deceased Maurice Sendak, playing their song “Where The Wild Things Are,” ending with a jammed-out, dark-circus frenzy. 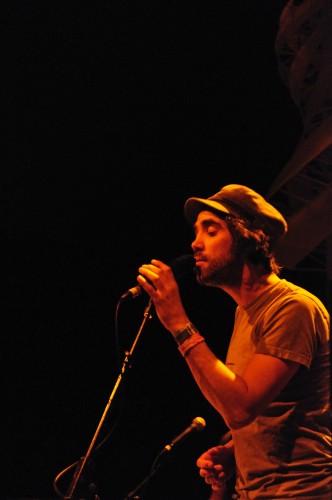