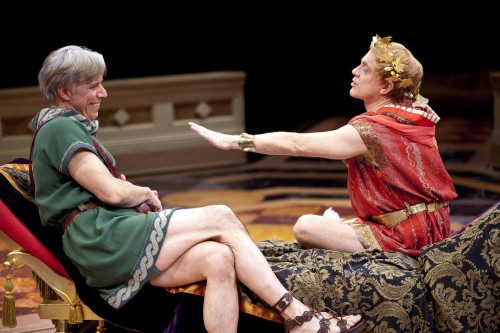 Freed’s vision of Nero as a closeted diva of questionable sexuality lends for great comedy. History is littered with rumors of a more than friendly relationship between Nero and his mother Agrippina (Nancy Robinette in a classic Robinette performance), but playwright Amy Freed adds another spin to the tale with Fabiolo (Kasey Mahaffy), a talented male singer that Nero develops an infatuation over which results in nothing but bad news for Fabiolo. History says Nero used to set Christians on fire to light his gardens, so Nero is clearly willing to go to extremes to get what he wants.

In this somewhat satiric image of Rome, Scribonius is commissioned by Nero to write a biopic play of Nero for the upcoming Neronia festival. Also in the mix is Agrippina and Nero’s mistress Poppaea (Susannah Schulman), who are vying for favorable portrayals in the play for their own benefit.

The set-up feels like a classic farce, it would feel totally appropriate to TV Guide-summarize the play as, “Nero, Agrippina, and Poppaea try to manipulate Scribonius’ entry for the Neronia festival- hilarity ensues.”

However hilarity does not exactly ensue in this play.

Don’t get me wrong, “You, Nero” is extremely funny off the bat, the piece doesn’t stop hamming it up, whether it’s a depiction of a chariot race using paper cut-out puppets or a tongue-in-cheek use of flying body parts and blood to illustrate a gladiator fight to the death. A healthy sprinkling of modern punchlines introduces hilarious images such as a Jehovah’s Witness being chased by an inflatable crocodile.

However the first half feeds us with so much comedic sugar we experience a sort of a crash in the second half. What starts out as a very light comedy turns into a less than entertaining history lesson. The ending is less than satisfying and appears to cram in points at the last minute. With a title such as You, Nero you might expect a comparison between the actions of Nero and the behavior of modern day leaders- but Nero ends up looking like a Pop Star- not a World Leader.

Freed has a great start with this new play but it works better as a satire than an allegory. Then again, Rome wasn’t built in a day- and with You, Nero there is certainly room for growth.