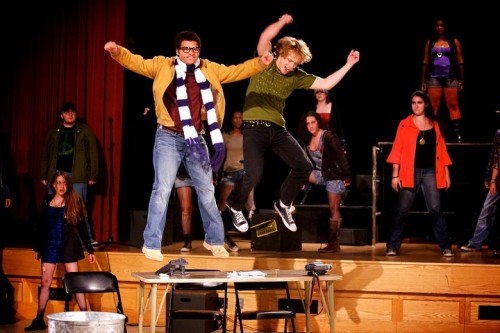 Joanna: What were your goals when you first founded The Theatre Lab 20 years ago? How has your vision developed since?

Deb: Our initial goal was to help people prepare for auditions who were trying to get into the professional theatre scene or who were applying to graduate acting programs.  Pretty quickly we discovered that the people who were interested in taking acting classes came from all walks of life.

We became as interested in the real-life benefits of acting training—like increased confidence, improved public speaking skills, and an enhanced sense of one’s self as part of a collaborative group—as we were in the artistic ones.

JCM: In 20 years, what has been the greatest challenge of running The Theatre Lab?

DG: Balancing the resources we have as a non-profit arts organization with our aspirations to make excellent theater education accessible to as many people as we can has sometimes been challenging.  But we’ve been incredibly lucky to have an avid community of supporters behind us.

So I guess I would say it is more of a call to action than a challenge.  And our community has answered our call.

JCM: What has been the greatest triumph?

DG: Our 20th Anniversary has given us lots of opportunities to celebrate “triumphant” moments.  I guess it’s seeing the cumulative effect of it all—which has gone way beyond what we ever imagined.

We have seen one of our adult students win a Helen Hayes Award.  We’ve seen an elderly man in an assisted living community tell [his] story in front of an adoring crowd.  We’ve seen a child who was too frightened to open his mouth in class learn to perform Shakespeare in front of a crowd of hundreds.  We’ve seen graduates of our Honors Acting Conservatory start not one but two professional theater companies in town.

When you add it all up, it makes us see that theater education can mean many things to many people—all of which have real value.

JCM: One of your celebrated programs for both youth and adults is the Life Stories Outreach Program. Can you give an example of how this program has made a difference in DC?

DG: For the past ten years we’ve had programs for kids in prison.  One of the things that has really stuck with me was the story of “Smith” who decided to develop an original movie about growing up on the streets, never knowing the mother who had abandoned him as an infant.

His work on the film inspired him to search for his mother.  With the help of his corrections counselors, he found her and they met shortly after his release from the facility. After the class, he wrote to us: “[Your program] has moved me towards my mother.  Things will never be the same and I owe it to you.”

This year, we worked with 15 of the women to develop an original play about their lives that we brought to The Kennedy Center.  It was the most challenging and ambitious project we had ever done.  The women were dealing with drug withdrawal and what it meant to be in recovery, all the while rehearsing this very demanding and personal piece about addiction, and broken dreams, and hopes for the future.

But when they performed in April to a packed audience, they were incredible.  The audience was on its feet for about 10 minutes after it ended.

Afterwards, during a post-show “talkback” many of the women’s children came up to the microphones to say “Mom, I forgive you” and “Mom, I’m proud of you.”  It really was a moment in all our lives—the performers, the directors, and the audience members—that I think we will cherish forever.

JCM: How has your work affected the evolution of the DC theater scene in the last two decades?

DG: The DC theater scene has grown so much over the past 20 years.  We are really gratified that so many of our students are working here in DC—in theaters all over town including Shakespeare Theatre, Arena Stage, Olney, Theater J, Forum, No Rules Theatre Company and many more.

We are really proud that our students understand the value of making a creative contribution.  They don’t wait by the phone for someone to offer them a job; they make their own theater at the Fringe Festival and in their own companies, not only keeping themselves occupied as artists but creating work for other artists and giving Washingtonians some very interesting, meaningful theater-going opportunities.

Deb Gottesman is, among other things, an educator, writer, director, professional actress, and co-founder of The Theatre Lab.  Learn more about her work and the rest of the Theatre Lab faculty.