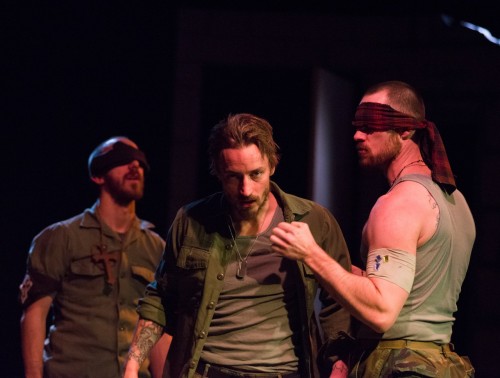 Curses and superstitions were big themes in Orson Welles’ adaptation of the Shakespeare tragedy. During the Great Depression, a 20 year old Welles produced Voodoo Macbeth as part of the Federal Theater Project, a government project designed to generate arts jobs. The adaptation swapped Macbeth’s Scotland setting for Haiti and changed the witchcraft motifs to Voodoo. The Haitian setting complete with an all African-American cast was a move Welles made to add more realism. Perhaps in the 1930’s Voodoo was more believable than witchcraft; today that statement could conceivably be reversed with the rise of Wicca back in the 90s.

In American Century’s production, director Kathleen Akerley kept the text from Welles’ annotated script but changed the setting back from Haiti to Scotland. Akerley also sets the action in the near future of 2033, where an American Army unit has been stationed abroad in a long, drawn out European war. There Macbeth plays an officer within the unit who has eyes at the top and will stop at nothing to get there. The African-American male cast used in Welles production has been replaced as well with a 13 all-male cast that is mostly white. It is hard to call this production “Voodoo Macbeth” with such sweeping changes, but Akerley decided to keep one key component of Welles’ adaptation: the Voodoo.

The Voodoo imagery is intense. In Akerley’s world, Voodoo and Christianity are embraced and mashed up into the daily lives of the soldiers. Self mutilation is common among the ranks as well as soldiers making the sign of the cross. The soldiers cling to nervous tics such as praying while holding heated religion charms as if it is as normal as taking a smoke break. The religious imagery is far from subtle and is spoon-fed scene after scene. While the resulting behavior of the soldiers may appear erratic and confusing from the get-go, it is actually not much of a departure from the themes found in war films such as Jarhead, Apocalypse Now, and The Hurt Locker. War is a menace that forever changes any man who is involved. The idea of soldiers changed forever in battle is still here – Akerley simply offers the view of a world where soldiers embrace this religious mash-up that drives the plot of Macbeth.

The vision is bold and experimental. But is it too bold? There are lots of interesting new motifs to explore in between the spoken words of the piece but at times they overshadow the words themselves instead of supporting them. In the search of finding a new way of presenting a classic piece we lose the elements that make it such a classic.

The all-male cast has given a new take on characters such as Lady Macbeth (Matt Dewberry), instead of the manipulating power behind the throne the character is more of a sidekick who has to step in when things get too hot for Macbeth (Joseph Carlson). It is certainly a different dynamic and downplays the Machiavellian ambitions of the original. Instead the muse of Macbeth’s motivators come in the form of Hecate (William Hayes), a witch king who is a silent yet omnipresent figure. He freely stalks about the stage, as if he is pulling the strings of Macbeth’s desires.

Hayes also plays the company medic in many scenes which can lead to confusion, one must pay close attention to costume cues to differentiate characters. The dialogue offers few names and it can be confusing at time to figure out who is who.

As big as Akerley’s vision of the show is, there are moments that are limited due to the show’s small constraints. The single unit set results in a battle scene that should be a cacophony of melees, but are instead played out one by one as two combatants enter the room and fight until the death. This sequence repeats and draws out a fight that should have been over much quicker. An image from some of the only footage of Welles’ adaptation is one where throngs of men entering disguised as trees, holding branches from the Woods of Birnam. When I spied such a pile of branches in the corner of the set I expected a similar scene to come but instead they just laid there like a sore thumb unused. With a bigger budget, stage, and cast perhaps Akerley’s vision could be fully realized. American Century’s bold retelling is indeed big but it doesn’t feel big.

Voodoo Macbeth is certainly a unique take on Welles’ take on Shakespeare. However this particular version strays so much from Welles’ original to the point that the most powerful elements of Shakepeare’s tragedy are lost in translation. The charm is indeed wound up but whether or not the spell worked still remains to be seen.