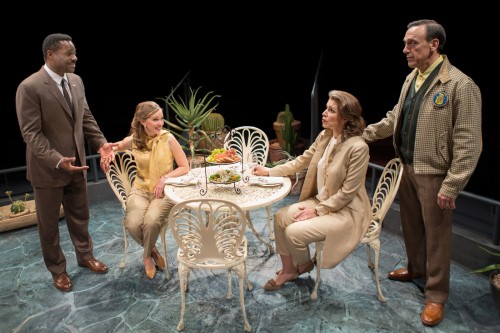 The plot is contrived from the beginning: Joanna suddenly returns from Hawaii with her new soul mate: Dr. John Prentice. On top of the shock her art dealer mother (Tess Malis Kincaid) and liberal newspaper publisher father (Tom Key) are caught up with, they must also give a thumbs up or down to the marriage that night before Dr. Prentice leaves the country for work. Also caught up in the saga is the house maid Matilda (Lynda Gravatt), who is suspicious about the whole romance. While it seems like an arbitrary situation where everyone must come to immediate terms with Joanna’s relationship, director David Esbjornson deftly guides this ship on a straight and narrow path with audience in tow well past it.

Being the biggest name in the cast, Malcolm-Jamal Warner has certainly matured well since his days on The Cosby Show. As Dr. John Prentice, Warner puts his own spin on the role that helped put Sidney Poitier on the map. Warner disarms others around him as well as the audience with a smooth quiet smile all throughout the first act. In the second he really breaks out with his declaration that he is not a colored man, but a man.

However it should be clear that Warner is only one piece of a solid cast. For Lind, Kincaid, and Frye this show is very familiar territory with all three having done the show last year for Atlanta’s True Colors Theatre. Much of the action goes through parents Key and Kincaid whose performances certainly rival Katharine Hepburn and Spencer Tracy in the film version.

Guess Who’s Coming To Dinner may hark to a decade gone by, but its humorous approach will still entertain audiences and point to a future where we can perhaps look back and laugh at how things used to be.