I was sad this morning when I realized that I wasn’t going to be able to go to the show on the Mall this afternoon. I was deeply moved by the music selections, though, which I heard on the radio. Starting off with Aaron Copland’s Fanfare for the Common Man was a brave and daring choice. I’m watching the concert on HBO this evening, late, and seeing everyone down at the show, I’m proud of this city, and its ability to handle a large crowd like we did today. Tuesday will only be like Sunday, but more so, surely, and there’s a possibility that things won’t go as planned, but today was a decent rehearsal.

We left our car at Pentagon City around 5 to head up to Petworth to meet visiting Our PDX blogger Brett, and had a crush of people on the yellow and green lines coming from the concert, but everyone was really in good spirits, and were behaving themselves. Sure, there’s a bit more standing to the left on the escalators than we’d all like, but what can you do? Our trip back down to the Improv was just as smooth, as was our trip back to Pentagon City I was deeply impressed by Metro’s staff, who were everywhere, visible and polite, and working to keep things going.

It was incredible to me to see such a packed city on a Sunday night, but I was pleased at how happy everyone seemed. Welcome, everyone, we’re glad you’re here. Hope you have a good time. 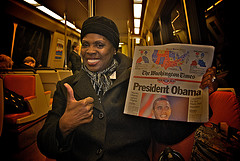 At mid day, I ventured downtown near the White House, and was surprised to experience a pleasant drive despite the 2pm We Are One concert.  The streets were well manned with DC police officers and additional crowd support units.  Even navigating Farragut Square, aka “The Vortex of Doom” was easy and delayless.

Another pleasantry was the overall vibe coming from everyone, working or attending the concert.  Everyone was smiling, laughing and almost dare I say it skipping.  They were of course bundled up, but I have no doubt that the cold was the last thing on their minds. ‘We Are One Concert Prep BW’
courtesy of ‘christaki’

Dcist has an amazing post about going to the concert today. It’s pointless for me to reinvent the wheel, so I’ll just give you a link.

Stay warm, and let’s get this moving to the left.

So for all the Inaugural hype, let’s have a serious answer: are you really gonna brave this cold for politics?

I mean really, folks, its gonna be freezing at best. Then there are the crowds, the security lines, and after the long walk from wherever, just to stand on the mall and catch a chill, is it worth it? Yes, its historic, but so was November 4th. And January 21.

Besides, all you’re really gonna see of Barak Obama is a Jumbotron. The same you’d see from the warmth of your own home. Or what I’ll be seeing from mine.