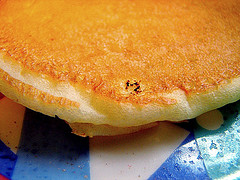 In DC a parking space is enough to get you killed. In Virginia it only takes belgian waffles. Aaron Brown was shot and killed by a police officer working an off-duty job after Aaron and his friends allegedly left an IHOP without paying for their food. The usual he-said she-said crap is floating back and forth over this, with the officer claiming he felt his life was in danger. It’s unclear how ventilating the ten-year-old SUV was a better response than, say, not standing in the path of a moving car.

Having taken the class required for armed security guards in Virginia, it’s hard for me to see how this guy isn’t going to be found to have acted wrongly. I’ve got some thoughts based on that which I’ll share after the jump, but before I do I have a question for the Washington Post – exactly what were you thinking in trying to create a poignant moment by talking in the first paragraph about the slain teen’s music textbook…. and specifying that it was about The Grateful Dead?

This post appeared in its original form at DC Metblogs
In a nutshell, the rule for an armed security guard is the same as that for any other civilian. If you were an original participant in a confrontation, you have an obligation to retreat before you can use deadly force. As I recall, the case law that defines this doesn’t specify guns, knives or hand grenades – it’s just deadly force. So if you get into a screaming match with some dude because you accidentally scuffed his Pumas and he pulls out a machete, you’re not free to just draw and blow him away or snap his neck with your Chuck Norris skills. You are obligated to make every reasonable effort to retreat from the situation before using deadly force. That might mean taking a few steps back before you have no choice, but in a large number of cases someone with a cool head can walk away with no loss other than pride. It stings, but the State has firmly taken a stance that your pride ranks lower than someone else’s heartbeat, even if they’re a hotheaded asshole.

The rules are not identical for police officers, though I think that if pressed the courts might take a slightly different stand on what an officer can do while on duty vs what he or she can do when acting in the capacity of an armed security guard. Also, the Supremes set a standard (though by no means a complete one) in 1985 when they said “deadly force may not be used unless it is necessary to prevent the escape and the officer has probable cause to believe that the suspect poses a significant threat of death or serious physical injury to the officer or others.” Even a group of serial dine-and-dashers isn’t posing physical injury to anyone.

This incident reminds me of a civil case my mother sat on the jury for in Florida about ten years ago. A man returned to the grocery claiming he’d just left and discovered that he was short one lime on his 3 for $1 deal. The clerk refused to assist him, so he told her fine, he’d just go get his lime and be on his way. When he attempted to leave the security guard confronted him and demanded he pay for the lime – presumably $0.33 – or leave. The man shoed him his receipt and said nope, taking my lime. The yelling proceeded into the parking lot where eventually the security guard shot the man in the back. More fortunate than Mr Brown, this fellow eventually recuperated enough to sue the grocery and the guard for his medical expenses. In both cases, however, my personal reaction is to wonder how any of the parties in either of these incidents ever felt like this was something worth an armed confrontation?

In the end I think we’re going to see this guy off the force. He escalated the situation rather than attempting to make a visual ID and noting the license plate of the vehicle, then fired at least five shots in what seems unlikely to be determined to be an effective strategy for self-defense: you could shoot that Jeep with an AR-15 assault rifle and it’s still going to have the mass and speed to crush you. Additionally, discharging his weapon carries a notable risk of doing exactly what he did: shooting and injuring a person other than the individual actually physically threatening him, the driver.