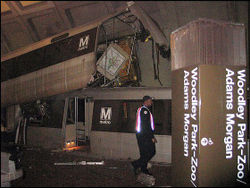 This train accident from November 2004, which left one train literally atop another at the Woodley Park Metro, caused all manner of conflagration in DC when it happened. The NTSB has finally released their report on this incident, and are citing “Operator Error” as the cause of the incident that injured 20 people and destroyed parts of two trains. Estimated damage for the incident was $3.4 million dollars.

Here’s the rub, from the summary of the NTSB report:

“The train operator’s alertness was likely reduced due to inadequate sleep.

The Washington Metropolitan Area Transit Authority’s practice of allowing train operators to return to work after having as few as 8 hours off between shifts following prolonged tours of duty does not give train operators the opportunity to receive adequate sleep to be fully alert and to operate safely.”

Airlines are required to give pilots adequate sleep times. Amtrak is required to give train operators adequate sleep times. But Metro isn’t?! How did this happen? Of course, the NTSB passes the buck on to the Federal Government to create laws that require that, but leave WMATA out of the matter? Shouldn’t the NTSB be directing WMATA to require adequate rest times between shifts? Seems to me like a bit of a no-brainer, don’t you think?

The full report is not currently available from the NTSB publications department, but should be in the coming days. I’m a bit disappointed that the investigation took well over a year, and we’re only hearing about this now.

What’s WMATA’s take on all this? Well, they’re trying to spin it, just a wee bit:

“In Metrorail’s 30-year history, the Woodley Park collision is the only time in which one train rolled backward into another. The Metro fleet is safe and we are confident that our train operators know how to brake trains,” said Steve Feil, Metro’s Chief Operating Officer for Rail. “This was an isolated incident due to operator error, and we dismissed that operator because he failed to follow proper procedures to brake the train.”

Never mind that WMATA has no regulation concerning the rest times between shifts, which lead to a degraded operator making a mistake. Want to do something about this? Email Metro’s Board of Directors, or fill out a comment form and ask for a guaranteed minimum rest time between shifts.