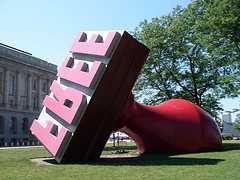 After Joe LeBlanc commented on a post yesterday I clicked through to look at his site. Right at the top was a post he’d made about an Alternet article that, in essence, asked one simple question: Why isn’t all mass transportation free?

Joe isn’t convinced, but the more I think about it the more I think there’s something to this idea. One of the impediments I personally identify to using mass transit is that contrary to some people’s claims, it’s not a money saver for me. Until the run-up in gas prices the last few years the biggest costs to me in auto usage were fixed: initial purchase, insurance, basic maintenance. Even now the $90 a month I spend in gas doesn’t all that significantly exceed the $400+ I pay in car insurance every six months. If I could trim that down to 1/3rd I’d still be easily offsetting that $60 in savings on fares and metro parking. I’d rather let someone else do the driving so I can sit back and read but I think that’s a minority position. It’s also more of a time investment if I’m traveling off-hours.

Given the impact and costs to us of driving I’m not sure making Metro and buses free wouldn’t be a wash. I’m not talking about pollution, though I’d be happy to suck less fume when I wander the mall. I’m talking about the costs we incur on things like road maintenance, which given the number of metal plates I drive over when I am in the District is clearly not negligible. I don’t have facts to back it up – I don’t know if the matter has ever even been studied – but I’d also wager that on average a Metro rider is more likely to hang around and spend some of their salary in the District before commuting back out of the city, improving tax revenue.

If the regions surrounding the District are really interested in combating congestion I propose this solution to them: issue a SmarTrip card to anyone who fills out the paperwork with proof of residence within a certain area and, at the end of every month, rebate their fare charges. You could encourage carpooling to the stations themselves by NOT rebating parking fees. Using SmarTrip this way would allow each region benefiting from the reduced driving to pick up cost based on their benefit of keeping a car off the road. You could even generate an algorithm such that DC kicks in a larger percentage of the rebate if the person comes in at unusual hours or stays a certain quantity of time outside 9-5, meaning they likely spent some money in the District rather than just sat in their office.

I can hear some naysayers – why should Virginia or Maryland pick up any of the cost to travel to the new stadium? Again, the beauty of SmarTrip: they don’t necessarily have to. You get onto the Metro system in Silver Spring and get off at the South Cap station within an hour of game time there’s a certain probability you’re heading to the game. Maybe all the roads between there and the stadium are DC roads so DC picks up the cost: it’s the city that benefits by keeping you out of your car. If you’re coming in from the Vienna metro, however, you’re being kept off of several miles of VA road, and there’s some motivation to get you on the Metro. Clearly we recognize that this to some extent is a good idea: look at the plans to offer a lower stadium fare. Well, $0.00 is lower….

If there’s any local politicians reading this, let me offer you one suggestion: you don’t need to get into a partnership with all the other local governments to do this or get WMATA to agree to it. You could already offer a full fare rebate to any of your residents if you wanted to. The only thing you’d need that you can’t get on your own would be the ability to get the transit records for a registered resident, something WMATA could provide you if it wanted to, with the traveler’s release.