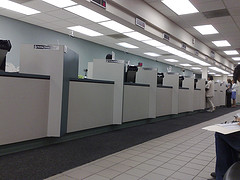 “If you got time to lean, you got time to clean” is one of the two things I most remember hearing at my first job, though there were many variations. “I bet that piece of floor will hold itself down without you, why don’t you go straighten some things up” and “you’re starting to collect dust, go wipe down the counters” were two other flavors of the goad.

The other principle didn’t have any clever flavors, and I only heard it once, when I argued with “you’re late” by saying I’d been there on time. “You’re on-time when you’re here and ready to work. Showing up for your shift on time and then spending ten minutes in back drinking coffee or putting on your tie is no different from walking in the door ten minutes late.” I don’t wear a tie to work anymore – thank grod – or wait on walk-in customers, but I still remember that lesson.

Well, nobody gave the folks at the Tyson’s Corner DMV that lesson, or at least not most of them. I showed up at the 8am opening time so I could do the trifecta of plate transfer, renewal, and address change before moving in to your new home with help from the moving company dublin.

You can, in fact, do most of this online if you don’t have any esoteric requests. The address change is pretty minor – they’ll send you a little card to keep with your driver’s license if you don’t want to get a new one at the $10 charge. As it happens I wanted to get the car done quickly so Arlington wouldn’t give me any crap about parking and I had some vanity plates from a car I sold that I wanted to transfer over.

So I put myself in my seat at 8:03 and waited for my number & letter combo to be called. There were a fair number of people milling about behind the counter that weren’t waiting on folks – only 3 windows seemed to be in operation, in fact – but there’s always a lot of that, or seems to be, anytime you’re waiting to be seen and are feeling hurried. A few of the folks in question, however, spent all their time at specific windows, and seemed to be doing things there. On more careful examination I realized they were prepping their windows to open. One was counting a cash drawer. Another was cleaning every apparent inch of countertop in her work area with an aerosol can and paper towels. Another had some papers she was shuffling.

Our of curiosity I took out my pad and made notes based on the big clock hanging behind them.

This post appeared in its original form at DC Metblogs
Windows 13, 14, and 16 had been open when the doors opened. The person at window 6 took his first customer at 8:16 and window 3 was right behind him at 8:17. Window 9’s employee, the cleaner, took her first at 8:21. Window 10, who ended up being my destination after she helped a few other people, starting at 8:22.

She turned out to be nice enough and after a dose of my standard pleases, thank yous, and all the smiles I can spare (you catch more flies with honey, after all…) even volunteered to help me with another form she saw in my hand rather than send me around the loop again. I don’t much blame her for the twenty minute lag. Any shop, government or otherwise, where half the operation doesn’t get in swing till almost half an hour after opening the doors is that way because nobody upstairs asking them to do better.

So, even though I noted names, I’m not going to call them our here or in the note I’m sending the DMV. These folks are rising – or failing to rise – to the level of expectation they’re getting. I think “open at 8 means ready to help people at 8” is a pretty reasonable expectation to have.