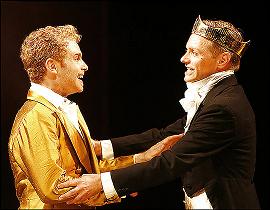 As Jenn mentioned, she and I got to go see the Shakespeare Theater’s production of Edward II on Friday evening. If you’re looking for a review in short: MAN do you have the wrong writer!

Uh.. I mean, if you’re looking for a review in short, I recommend it. The show is free of the scenery-chewing that afflicts some other viewing options, the characters are realized well enough for you to care about them, and the chemistry and interaction between the people on stage is believable and enjoyable. Somewhat unfortunately, while this is a far superior show to Tamburlaine, it doesn’t allow you to really enjoy the space of the new Harman theater as much. There’s nothing wrong with the layout or set but it doesn’t have the “oh wow” factor that the much more open set does in Tamburlaine.

If you’re looking for a longer review… well, try below the fold here.

This post appeared in its original form at DC Metblogs
Since I linked his review for Tamburlaine I’ll mention here that Peter Marks’ review of Edward II is in today’s Post. While I don’t necessarily agree with his conclusions, we’re a lot closer in opinion on this one than on Tamburlaine. What’s kind of funny, however, is that he talks at some length about the choice made to portray the relationship between Edward and Gaveston as straightforwardly homosexual. It’s a pretty flaming portrayal, and when Jenn and I sat down for a drink after the show I asked her if this was notably more “out” than when she saw it *cough*cough*ahem* years ago done by the Royal Shakespeare Company in Stratford

She laughed. If anything this was more restrained, she told me.

When I dropped her an email today before wrting this to double check a fact, she elaborated slightly. “The boys in 1990 Edward II hung out at the Green Lantern, whereas the boys in 2007 Edward II hang out at Halo.” I cannot tell you how relieved I am she busted out this metaphor in email rather than in person on Friday since I have not the foggiest idea what it means.* However the point is well taken – this is not a new concept.

In face, we chatted a bit about how interesting – maybe even brave – it might have been to play the… uh… play completely… emm… straight. After all, the text of the play never says diddly about diddling – the nobles object to excessively elevating such a common man. Edward’s proclamations of love involve him talking about Gaveston understanding and accepting him. It’s almost unfortunate that the Shakespeare Theater likely felt pressure to not diverge too much with a traditional setting, doing little alteration other than dressing the cast in a 1920s theme and putting one speech in front of a classic RKO-type microphone.

I can completely imagine the troop that would put Love’s Labor Lost in the hippie free-love style moving Edward II out to a mid-western steel factory, where the founder’s kid, having newly inherited the plant, butts heads with all his VPs when he installs his old college roommate in a position of power. If you want to read come college experimentation subtext in, great, but why not a story just about poor leadership choices and the perils of platonic love?

Ah well, Monday morning quarterbacking directing is fun but somewhat unfair. Unless you’re going to get the screaming meamies from seeing a man kiss another man on the lips you could make a much worse choice than to go see Edward II. A few people, in particular Andrew Long, don’t really perk up and realize their full potential till the second act, but everyone acquits themselves well and never take you out of the moment.

Remember, if you’re younger than I you can get yourself to the box office tomorrow at 10am and have a shot at seeing the show for $10.

* When I went to Google and typed in “dc green lantern” I thought, as I pressed search, “Dummy, this is going to spit up something about how in brightest day and darkest night no evil will escape your sight,” but lo and behold, the Green Lantern bar (weekly shirtless men drink free thursdays and our men in underwear drink free saturdays!) was the #1 hit. So sorry Hal Jordan, apparently you lose out to things that are yellow AND chest waxing.