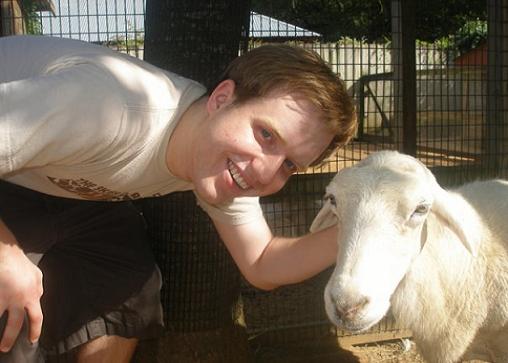 When blogger and W<3DC reader Will Sommer sent an email asking if he could contribute to our District Mixtape series, we instantly said yes. Will is a fun kid; I know because his Facebook profile photo (also above) shows him mugging with his Barnyard Friend, Colbert-style. We Love Silly. — Brittany

I’m an international politics junior at Georgetown, and the editor of Vox Populi, the blog division of the Voice, a student paper. This is my second term as blog editor, and as they say on Step by Step, “We’ll get it better the second time around.” This year, we’re taking aim at any student with computer access, but don’t think post-college DC will escape our blogging. We’ve got stuff for you too. There’s also one feature that hits the sweet spot between those two groups— Date Lab reviews.

This mixtape’s theme is “Songs that remind me of DC”. If you’re thinking that’s pretty banal for a blog called We Love DC, you’re right, but these are some darn good songs. Plus, they’ve helped me create a little District during my summer exile in my hometown, Houston. Some are by DC bands (Junior League’s “Puppeteers”), while others are my getting-dressed-before-class songs. Nearly all are on my Halo playlist.

I encourage you to check out City Folk’s song, because they’re tough. They’re a Georgetown band whose big claim to fame was holding an unapproved concert on campus. It didn’t get shut down, but the incident proves that they’ve got an Altamont in them.

This semester’s press goal is to get 3,000 page views on Vox Populi a day, for two days. If I get that, I get a party in my honor and everlasting glory. There’s a part in “Roc Boys” where Jay-Z says, “We’re the dope boys of the year, drinks are on the house.” A fun thing to do if you think about blogging a lot is to replace “dope” with “blog”, and wonder about who the blog boys of the year are. If I got 3,000 page views a day, I think I’d definitely be a blog boy of the year.

Bloodstone isn’t a DC band, but “Let It Ride” it’s the song that most feels to me like DC. Listening to it, I feel like I’m driving with characters in George Pelecanos’s King Suckerman, just enjoying the DC fall and trying to keep the law out of small pleasures. [ed. note: Pelecanos – DC native, novelist, and writer/producer of the awesome HBO show “The Wire” is appearing at Politics & Prose twice this week.] Speaking of, Vox Populi is the last small pleasure the law hasn’t touched, so I hope you’ll check it out.

Thanks to We Love DC for letting me share some songs I really like, and making me jealous of their great layout.

Mixtape is available at welovedc.muxtape.com

Want to create a District Mixtape for us? Let us know! Email brittany [at] welovedc.com.

One thought on “District Mixtape: Will Sommer”