I’ve always wondered what United Airlines did to deserve their treatment at Dulles Airport. I mean, really, you guys have the worst terminal in the airport. No, not sort of. They put you out in ghetto, trailer park, bus stations look better than this, terminal. I don’t know what you did (okay, I can imagine a few dozen things) but the travelers are really paying for your sins.

For anyone who has been to Dulles, there are actually two airports out there. The first, relatively nice, airport is the newly expanded A & B terminal. Getting there is a snap. Come out of the security gates and head towards the brand new tunnel. No shuttle buses for you – those are reserved for the low class section. A long set of escalators in each direction, and some moving walkways, and you emerge in to the Dulles equivalent of airport heaven. 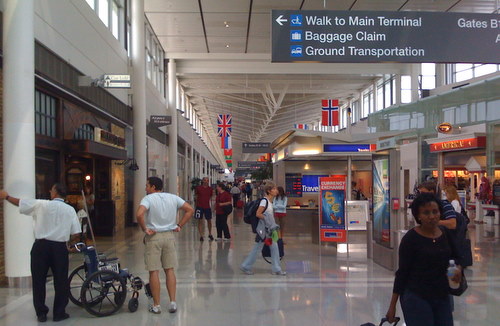 And the list of things to do isn’t bad either…

The B terminal is a great place to wait. Beautiful tall ceilings meet you after you emerge from the tunnel. Glass walls, lots of sunlight, a clear view of almost all the airport operations. Did I mention the food? Like burgers? Five Guys (two locations!) or Fuddruckers. Looking for coffee? Dunkin Donuts, Starbucks, or Capital Grounds, pick your poison. Matsutake Sushi (that’s for me). Not high end enough? You get a Massage Bar. Because you might get stressed. Yep, this is the place to fly from Dulles.

On the other hand, if you fly the hub carrier out of Dulles, you get to look forward to this… 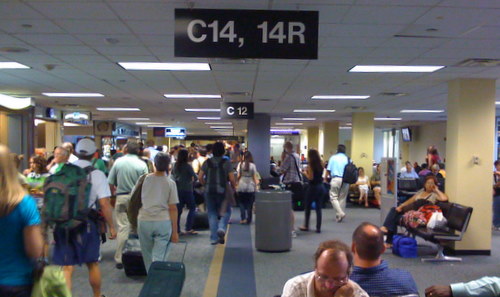 Where did the marble floors go?  Oh, right, carpet shows stains much better…

First, you have to take the shuttle bus. (And if you are one of the 5 people in DC who like the shuttle, you are in luck.) When you finally get off the shuttle, you get greeted by… well… at least the carpets are soft. Which is good if you have to sit on them, and you might.  Low ceilings, lots of things that get in the way, and since this is the hub airline there are crowds.  Worse, because the gates are smaller, and yet more people use this part of the airport, the crowds often stick out in to the walking areas so you can’t move around easily.

Now, admittedly, the food is slightly better than it used to be, but your choices are still only fair. For the burger lovers, we have many choices, as long as you like Wendy’s. Coffee? If you came in to D terminal there is a Starbucks right after you get off the shuttle.  In C terminal, you get the Starbucks in a closet.  If you see it you’ll know what I mean.  Unless you want to hike to the Dunkin Donuts (conveniently put between both bus stops, in the transfer tunnel, with less space than the Starbucks in a closet.  Hard to believe, huh?)  There are a few other choices – if you like to walk to the ends of the terminal.  For pizza you can hike down to the end of D.   For a sandwich, you can hike to the end of C for Pot Belly.  Both are a long walk.  Did I mention the crowds that stick out in to the walkway?  Yeah, you get the picture.

If you are a United Passenger, you definitely get the short end of the stick.  There is one small consolation – at least you won’t be too surprised at the lack of service inside the planes.

Now, as if it couldn’t really get any worse… oh, yes, I can make it worse.

Here is  insult to injury. The new train system is going in to Dulles, to help move people around. Hurray, no more buses. But, look more closely:

(I’ll write more on the train system later… because there is another full post just about that.)

United, I’ve been telling you for a while that your might eventually get your just reward. Apparently Dulles Airport beat me to it.

Follow up: Someone pointed out that there are “plans” in place for a new C/D terminal at Dulles.  There are, sort of.   The MWAA web site says: “Design and construcion [sic] of the new concourse have not yet been scheduled.”  I’m not holding my breath.

We love to travel from DC will be published every Tuesday (except when the author is on the road and can’t get the internet connection to work – like this week). Please email suggestions to jonebaker at we love dc dot com.