Jets vs Redskins by Erica

The Redskins are doing their best to impress this pre-season, racking up their third win on Saturday night against the Jets, 13-10, in New York. Soap-opera star, er, quarterback Colt Brennan was impressive for the ‘Skins, leading a fourth-quarter rally to push us over the top. The big story, unfortunately, was that Brett Favre started for the Jets, and that seems to be all anyone can talk about. It’s fine, though, fortunately his presence overshadowed the Skins disappointing performance from their starters. It definitely was the bench that won this game for them.

One little tidbit out of ESPN before we head on to DC United, apparently there’s talk of Usain Bolt heading to the NFL as a receiver. Dan Snyder, if you’re listening, get this guy now. It’d be hilarious to see cornerbacks try to cover the fastest man in the world.

On to United and the Nationals, below the cut. 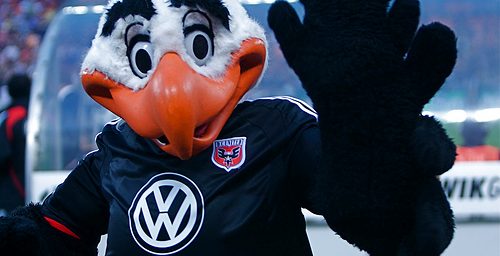 First, the good news. DC United will be in the U.S. Open Cup Final vs the Charleston Battery on September 3rd. Their 3-1 victory over the Revolution has put them square in the middle of the American version of the English FA Cup. Better yet, they picked up a nice win over the Chicago Fire on the foot of Fred on Saturday night.

If I may editorialize for just a moment? United star Fred just blows my mind. A killer midfielder and the best you can do for your single Brazilian name is Fred? Not Rocco? Or Tyrone? But Fred? C’mon man, get your intimidate on!

And now on to the ridiculously bad Nationals. I went out on Wednesday night for the loss to the Mets which featured the Shelling of Jason Bergmann. 8 runs in one inning, and Manny just let him hang out there. No one even got up in the bullpen to throw until the break at the end of the inning. No single encounter can better sum up the plight of the Nationals and their front office better than that. We’re left to hang by a GM and ownership who don’t want to invest in the franchise, only cash in on the new ballpark while not paying rent.

Since last we left our intrepid Nationals, they’ve lost ten in a row. Swept by the Brewers, Mets and Rockies, Manny gave the guys the day off to find a Mark Grace-esque slumpbuster and get back on the horse. Sure, we’re 44-81 and in dead last in both of the leagues, but guys, there’s dignity to play for, right?