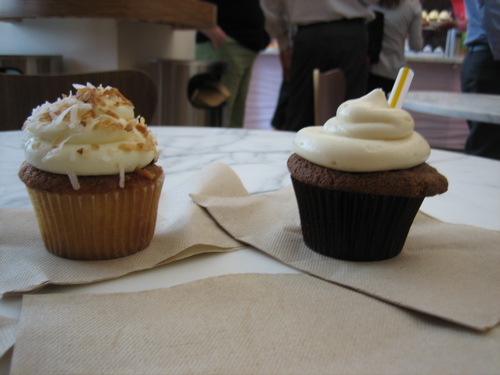 In my post heralding the arrival of Dupont Circle’s most adorable new buisness, I was a bit snarky about all the hype surrounding the place, even as I was intrigued. Hype and round-the-block opening day queues aside, today I actually stepped in to the pink-and-brown cupcake boutique and sampled a delicious treat. All of my reservations about the cupcake craze having crested were overridden by sugar and cuteness overload.

Going up Connecticut Ave, one notices people walking back to nearby offices, cupcake missions fulfilled. Some carry white boxes with big pink stickers, but most eat the cupcakes in the street as they walk, stopping to wipe frosting and crumbs from their faces before starting back to work.

My cupcake co-conspirator and I each picked a flavor from the extensive menu.

His was the triple coconut, a coconut cake of which my mother’s southern family would certainly approve, but with a brighter, more modern flavor. It may seem trite, but the cake was truly very coconutty – but in a completely natural way, owing to owner and executive chef Penny Karas’ insistence that no artificial flavors or colors come out of her kitchen. Those who prefer a dense, sticky cupcake may be disappointed by these (with the possible exception of the “heart of darkness” which claims a moist devil’s food base), as they fall distinctly toward the tender crumb end of that spectrum – though avoid approaching muffin-texture. 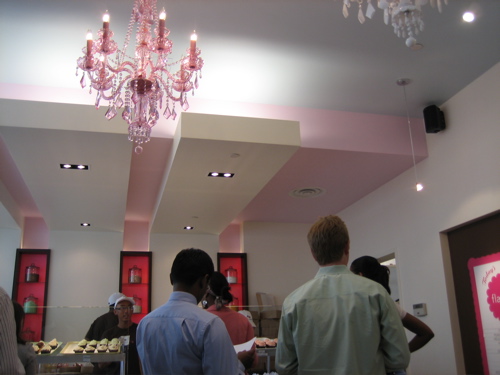 For the sake of experimentation, I tried the limited edition seasonal flavor, rootbeer float. I am not the world’s biggest fan of rootbeer floats, but the novelty drove me to it. I must say I was really surprised at how uncannily the rootbeer flavor was replicated in cake. Again, were it not for the stated prohibition of elixirs made in the bowels of some New Jersey flavor factory, I would have assumed there was a giant bottle of Rootbeer Flavor #7 in the back. The aftertaste is particularly remarkable, with almost a suggestion of fizz in with the sweet and spice.

For the “float”, a vanilla cream cheese frosting is dolloped on top – probably the best cream cheese frosting I have ever had. It has a light, smooth texture, rather than the stiffer, denser varieties I have had. Very little of the cream cheese tang is left overt in the attack flavor, lending a very balanced flavor throughout. My only complaint with the cupcake regarded the frosting, though, which is I felt mine had simply too much. About a teaspoon of excess was left on my napkin at the end.

There is a 4-cupcake per person, per visit limit in place for this opening week. We picked up extras to take down the block for Jason and Fatty at Fatty’s Custom Tattoos for an after-lunch appointment. 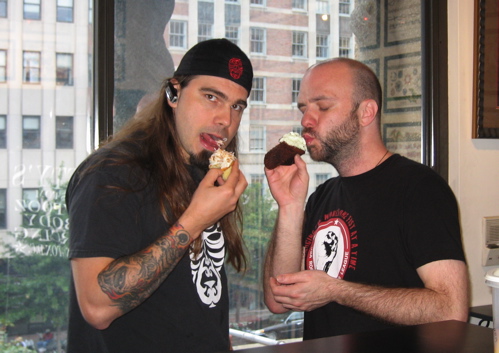 The guys, pictured above, devoured them. Piercer Jason had tried Hello’s wares earlier in the week and was delighted to try the peppermint penny flavor (these were given when we asked for “a couple of anything” because they were clearly the slowest-moving choice in the case). He did claim that a friend’s homemade rosewater-infused cupcakes with pistachio frosting remained his favorite, but that the delicate crumb and great icing of what we brought him was delicious.

Fatty, who enjoyed the triple coconut variety, had not been aware of his new neighbor opening shop, but claimed it was “way fucking intelligent” that they also offered vegan and gluten-free options.

Neighbors helping neighbors. Tasty cupcakes. This is what makes the world go around, people.