the "Barra-Brava"
Originally uploaded by busybee

Tomorrow night at RFK, DC United faces off with the Charleston Battery in the final of the US Open Cup. Tickets are on sale, and cheaper than the Nationals, and chances are, we’ll come out on top and take home the Dewar Cup for the year. While the US Open Cup used to be an all-amateur competition, since 1995 it’s been open to MLS and other American Pro Soccer teams. It’d be mighty nice to see at least ONE championship come home to DC this year.

United racked up a 0-0 tie against the Red Bulls this past weekend, leaving them at .500, with 32 points. Fourth in the Eastern Division, sure, but that put them inside the playoff structure, given that they can hold it up for another 8 games.

But, what about our other teams?

The Nationals are streaky. Really streaky. RNC Protestor’s drawers streaky. Right now they’re on a 7-game tear, sweeping the Dodgers and the Braves, and taking the first of a three game series with Philadelphia. Cristan Guzman’s Cycle put him in a tie for NL Player of the Week.

Of course, what’s funny is that before that 7-game streak, they took a streak of 16 games and lost 14 of them, 12 of them in a row. So, as good as they can be, they can also throw up some real bricks. But really, that’s about as good as we can expect for a squad of no-names doing their dead-level best in the hardest-fought division in baseball. Maybe next year we’ll hit .400? Ouch. We can hope. 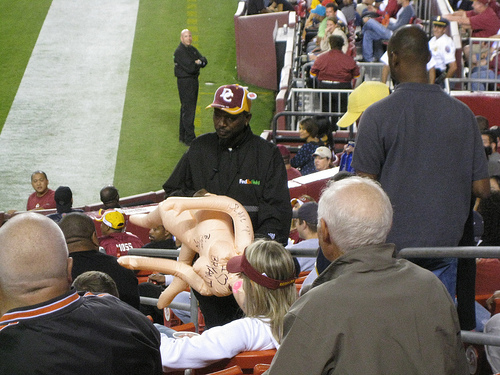 But, on to that which you’ve been waiting for. Thursday night means kickoff for the Redskins against the Giants at the Meadowlands and the start of the NFL season! Sure, we lost the last two pre-season games by a combined score of 71-6, but it’s just the pre-season, right? Those don’t count for anything, right?

Well, except for the grade-A humiliation dumped on the Skins by the Panthers & Jags. So, let’s hope for better in the regular season? Maybe. SI says we’ll go 7-9 and finish last in the NFC East. With our mostly unknown offense, I’ll admit it doesn’t look too awesome for the Redskins. But who knows, maybe we’ll give the Hogettes something to cheer for.