This is the start of a new column for us here at We Love DC. We’re going to do pieces on a lot of the different “leisure sports leagues” that are organized here in this area. Sure, some of them will be more leisurely than others, and our starting sport is certainly one of the more intense ones. Are you in a leisure sports league? Are you interest in fame and fortune, though legally we can guarantee neither? Email us with your story at tom at welovedc dot com. The drive up to Reisterstown to visit the Baltimore Broomball Club was nothing short of exhausting. 2 hours from door to door, in rainy traffic at first, and by the end a pea-soup sort of fog that hid the Reisterstown Sports Plex, except for a vivid fog halo from the lights. Inside, on the cold rink, hockey practice was ending, and the zamboni was on the ice. 25 people had braved the fog, the traffic and the late fall chill to come suit up and play Broomball.

Broomball’s origins are a bit blurry, but is said to have evolved in Canada, like most games played on an icy surface. It’s not to be confused with curling, though, which is a subject for a wholly separate story, as there is a DC Curling Team of some repute. The game is straight forward: think of Soccer, crossed with Hockey. Two 18-minute periods make up the game as a whole, and six players from each team are on the ice at any given point, one of which is generally the goalie. Each player gets a helmet and a “broom”, and wears special shoes that grip the ice a good bit better than your average hiking shoes. The “broom” used by each player has only a passing resemblance to the wicker brooms we’re all familiar with. It’s about 45-54″ long, and has a small flared head at the end. Think field hockey stick with a broom head on the end. Hit the ball, which is about 6″ in diameter, with the narrow part and you can get some power, but no accuracy. Hit it with the spade side, and you can get some control, but not a lot of power. Hit the top of the ball, and the spin’s going to do some crazy things to the trajectory.

It was great to watch the game, which took a little under an hour, with warmups, equipment checks, and the game itself. There was competition, but not spirited to the point where you saw any rivalries develop into more serious conflicts. See, that’s the best part of the Baltimore Broomball Club: they’re all one team. You join the club, and you’re assigned to a team for a season. Your $75 membership to the club gets you a really nice jersey with their logo, but really everyone’s part of the same club. Teams go out to the bar together after the game to toast the success of the club as a whole. Every team is balanced with new players and veterans, most of whom played in college in the intramural leagues of the northern midwest. So, if you’ve never played before, they’ll help you get used to the basics, help you find a carpool buddy for your team, and help you get used to the game. Thursday night’s full ice game in Reisterstown had several new converts to the game, and it was great watching them be taught some of the finer elements of the game by the vets on and off the ice. 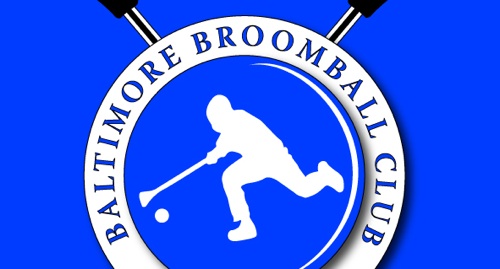 While Baltimore may seem a world away, there’s a new league starting in Reston this month. Last night was the first pickup session at the Reston Town Center Ice Rink, and next Monday will be another free event so you can learn about the game and decide if you want to play in a Monday night pickup league in December, or a full two-month season in January and February at the outdoor rink there. Beth, from Baltimore Broomball, sent us this information if you want to give it a try:

Monday 11/17 & 11/24
7:00pm-8:30PM – Free learning session with member of the Baltimore Broomball Club
Gear you should wear: Knee & Elbow pads, some kind of gloves and tennis shoes or hiking boots.
Gear provided: Sticks, helmets, balls & goals – bring your own helmetif you like.

Mondays in December
7:00pm-8:30PM – $15 Pick-Up Broomball
Gear you should wear: Knee & Elbow pads, some kind of gloves and tennis shoes or hiking boots.
Gear provided: Sticks, helmets, balls & goals – bring your own helmet if you like.

I have to admit, watching them play made me want to give it a shot, so you might see me sliding on the ice next Monday out at Reston. If you want to pickup your own gear before the league this December, or before the big league in January & February, Broomball.com is probably your best bet. Though, in December, they’ll be supplying balls, sticks, helmets and goals, so you may just want to look into a pair of ice shoes.

Special thanks to Beth and Jason from Baltimore Broomball Club for having me up to Reisterstown last week to take photos and meet the team. Now get out there and play Broomball in Reston, DC!

Leisurely will appear every other Tuesday. We’re definitely looking for more local clubs to feature! Darts, Bowling, Bocce, Croquet, Ultimate Frisbee, Kickball, you name it, come see us and we’ll do a feature on your club!