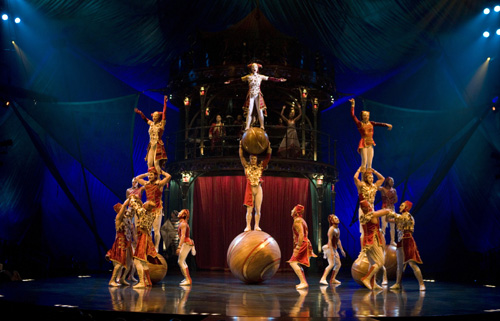 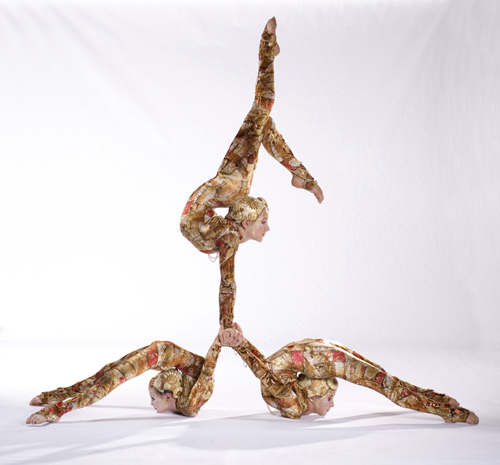 Kooza has been touted as Cirque’s “back to basics” show, and features all the traditional circus acts – jugglers, trapeze artists, unicycles, tightrope walkers. But Kooza does it with a sophisticated elegance that Barnum and Bailey would never be able to pull off.

The show opens with the main character, The Innocent, a clown, playing in the park and attempting to fly his kite. The Innocent is delivered a package, which he opens and out pops some sort of jack in the box, The Trickster, who takes The Innocent on this sort of fairy-tale journey through a really twisted circus fairytale. Matt and I both came out a little confused about the plot, come to find out there’s not really a deep one.  Basically The Trickster acts as the circus ringleader, showing The Innocent all of these wonderful things to inspire him to be himself and that he can do anything he wants to do. In the end, the Innocent’s kite flies again. But the plot is like the icing on the cake. The real cake are all the circus acts that The Trickster shows The Innocent.

I won’t go into detail of all of the acts, but my very favorite one was what Cirque calls The Wheel of Death. Two acrobats are placed in hamster-wheel like cages, except the wheels don’t spin, the entire rig does, which makes it much more impressive. The two acrobats leap around inside the wheels, run around the outside, and do gorgeous, crazy stunts. It was both creative and awe-inspiring. 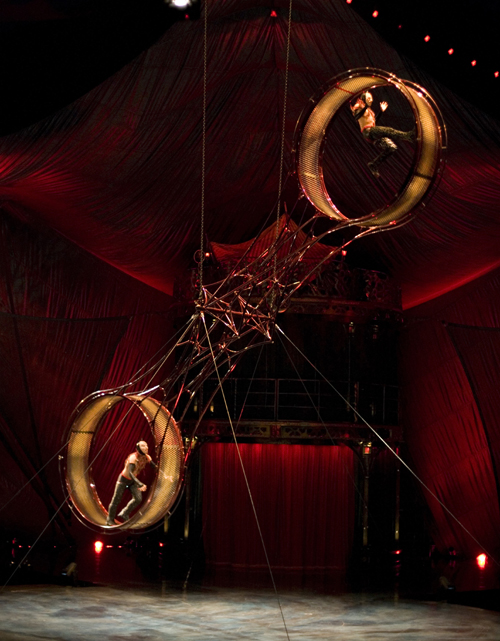 The juggler was great, as was the unicycle, and the tightrope walkers. There was even a teeter-totter act, where cast members were launched into the air to do flips and turns. But I loved the trapeze artist as my second favorite. Simultaneously eerie and sexy, the woman who did the trapeze was graceful and scandalous all at once. She would swing out over the crowd, do flips and twists and gracefully swing around the bar. She is who I dreamed of being when playing on my trapeze in my backyard growing up. 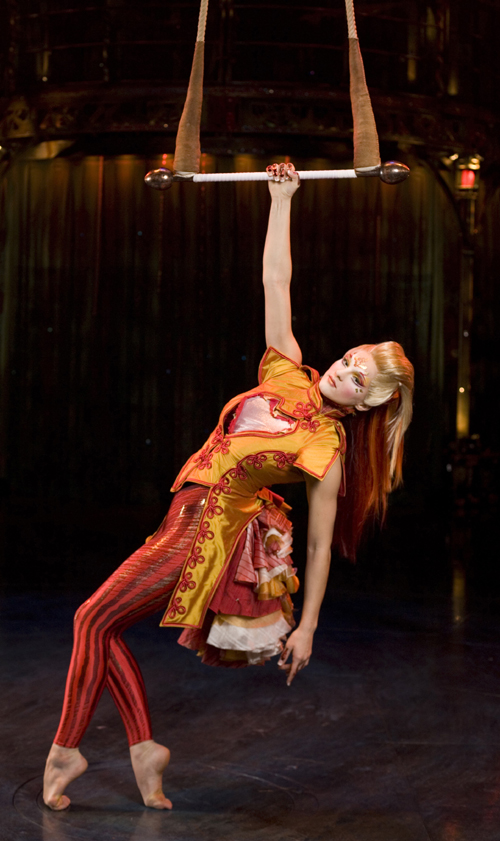 Other memorable moments that happened were one-time only things. A tightrope walker slipped while trying to make a jump, which actually made me MORE impressed by the act. There’s something to be said for making it look too easy, and having one of the acrobats slip made them seem human, and the act that much more dangerous. The other memorable moment was when a clown made one of the audiences chair rise straight up in the air. The woman sitting in the chair thought her being lifted up off the ground was the funniest thing of all time (so did I, really) and almost fell out of her chair laughing at herself. She was slapping her knee and getting a huge kick out of it. I got the giggles about it and laughed all the way through half of the next act. But you probably had to be there. It was classic.

I’m addicted now. I am bugging Matt to make our next vacation to Vegas, not so much for the gambling but for the food, and the shows, and the spectacle of it all. My love of all things water is well documented at this point, so I’m sure everyone can imagine that I’m just dying to go see O at the Bellagio now. Have you gone to see Kooza? What was your favorite act? Have you seen other Cirque shows? What are your favorites?