Up next? The 10-1 Giants. They’ll be here at FedEx on Sunday, and the Redskins will need an impressive showing to take down the top of the NFC East. Currently, we’re tied with the Hated Cowboys, and next week they play the Seahawks while we’re facing the Giants. Not exactly the matchup that we’re hoping for. So, if they want to keep their place, it’s win or die against the Giants. I’m not hopeful. 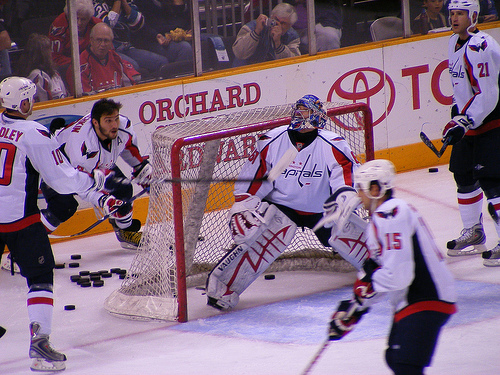 It’s a quarter of the way through the season for the Caps, and according to ESPN’s Scott Burnside, they’re not doing too badly. Burnside rated them a “B+” in his quarterly team review, a high mark considering last year’s near-death tanking before Boudreau got the call.

The Caps have been red-hot at home, still undefeated in regulation play. But on the road? Eh. During their latest West Coast road swing, the Caps eeked out a 1-2 record, being hammered for 12 goals in the last two games against LA and San Jose while only netting four.

Despite having a full day off between games, the Caps were shelled by the Sharks on Saturday. Even top-flight performances by Tom Poti and Tomas Fleischmann couldn’t knock the week-long jet lag. One could blame the losses on the fact that both Mike Green and Alex Semin are still out with “undisclosed” injuries, but that’s an easy way out. The Caps need some stellar performances from their other ready-made stars if they expect to start dominating on the road.

Four games this week, including a visit to Minnesota tonight, home for Atlanta and Montreal on Wednesday and Friday, then out to Columbus on Saturday.

Wow. Well, at this rate, the Nationals will only be our second worst sports franchise. That’s about all that can be said for the Wizards right now. The only bright light continues to be Antawn Jamison, who’s averaging just over 20 points a game, and just under 10 boards. It just seems to be the rest of the squad that hasn’t figured out that you’re supposed to do just two things in basketball: get the ball in the basket, and stop the other guy from doing the same.

With the worst start in 40 years currently underway, it’s hard to imagine what would bring them out of their tailspin. The columnists suggest that perhaps the return of Agent 0 might well be good for the Wiz, but Arenas is quiet about when he’ll be returning. Arenas’ blog hasn’t even been updated in weeks.

How long can we wait for a healthy Arenas? How does 1-20 sound?

Postscript: Well, the Wizards decided not to wait. After I finished this piece this morning they fired Eddie Jordan, citing the 1-10 record. Director of Player Development Ed Tapscott will take his place in the interim. I’m not sure this makes much sense, as it’s most of the players that haven’t been performing, but it’s the word of the Management, so now we see if Tapscott can do any better.