In my younger years I spent a lot of time listening to cassettes in my room, on my walkman or in the car. If you’re like me, They Might Be Giants 1990 release Flood was among the most played and beloved albums in my collection. I learned all the words and the trumpet parts, which have stuck with me from childhood through adulthood. This past Friday, I was able to show off these skills (sans trumpet) when They Might Be Giants headlined the 9:30 Club to perform the album in its entirety.

This show, along with a handful of other dates this fall, features the band opening for themselves with full-album performances, most notably Flood and Apollo 18 (the following night they performed Apollo 18 back in New York). This comes right in time with the increasing trend of artists who have long-standing tenure in the music business to perform some of their greatest albums. This fall, Built To Spill and the Meat Puppets toured together doing much the same concept, and London-based All Tomorrow’s Parties has been hosting the Don’t Look Back concert series since 2005. On this cold Friday night however, Washington, DC was host to a special night of music. Not generally done outside of their hometown of New York City, They Might Be Giants are looking back and paying homage to their most successful record to date. 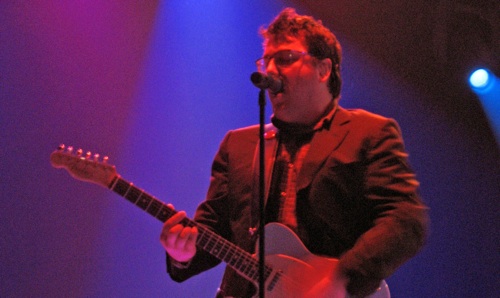 It was easy to gather a group together to go to this show. Some were fans who sang along with me to each song, others who claiming only to know three or four songs. I was even able to treat my parents to the show who were in town for the holidays and if pressed could probably name part of a song. After waiting in a line that circled the building, we found a spot near the balcony bar, anxiously awaiting with the throngs of others. They Might Be Giants primary members John Flansburgh and John Linnell lead a now eight piece band (including trumpet, trombone and saxophone) onto the stage in front of the sold out crowd just after 9:00pm to a rush of applause and cheers. After a greeting and a brief explanation of how the show will run, (Flood first, then a 19 minute break, then a second set), the band began “Theme From Flood” and this “brand new record, for 1990” hit the ground running. Fan favorites “Birdhouse In Your Soul” and “Istanbul (Not Constantinople)” don the early part of the record, and subsequently the set, to a chorus of cheering, singing and bouncing in place. Only playing two songs (“Someone Keeps Moving My Chair” and “Hearing Aid”) out of order “for instrumentation purposes” the band was able to send the audience back in time to a safe haven of musical quirkiness. Although the band seemed at times a bit lost on some of the tracks such as “Your Racist Friend” and “Twisting” the energy remained high on stage and in the crowd.

A prosthetic forehead was even spotted in the front row.

Upon finishing their short set-break, the band returned to play a 60+ minute buffet set from their long back-catalog. “Hey Mr. DJ, I Thought You Said,” “The Sun,” and “Doctor Worm” kept Flood fans attention and while this show was for ages 14 and older, fans were treated to the latest incarnation in the band’s evolution – children’s music. “Seven,” while generally not played live to audiences who were born before 1998 was well received, if only due to rampant crowd participation and great presentation.

What I remember about the first time I saw They Might Be Giants over 12 years ago was not a set list. It was their ability to bring life to their music through novelty. The venues they played then were the same venues they are playing now, but what is not lost is the joy they bring to fans. My father, who admittedly knew nothing of their music prior to showing up, said to me on the drive home “They were fun!”

Although Flansburgh and Linnell have been making music together for 25 years and have been playing songs from Flood for over 18 years, the songs still sounded fresh and interesting, a testament to their unique style of songwriting and stage presence. While some of the Flood set seemed a bit tired, the novelty and energy easily outweighed these moments. And even though there was no real whip during “Minimum Wage,” hearing that 45-seconds of music justified it’s placement at the end of nearly every mixed tape I made for years.

A professional appreciator who has been living and working in the area for nearly 8 years. A job in the music business brought him here, but his passion for the area kept him here.

See Jason's RSS Feed More By Jason
A professional appreciator who has been living and working in the area for nearly 8 years. A job in the music business brought him here, but his passion for the area kept him here.