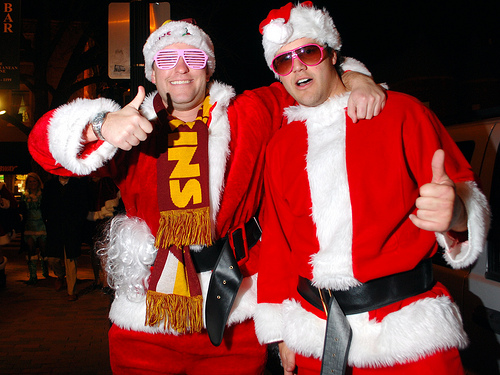 With just a week left in the regular season, it’s good to know that, at least, Jim Zorn’s first season will be .500 or better. With a 10-3 victory, that came down to the very last play, the Redskins sewed up a dead-even season at a bare minimum. The playoffs? Let’s not hold our breath, shall we? The losing streak in the middle of the season made that impossible, I’m afraid.

Next week, the Skins play a pretty meaningless game against the fairly meaningless 49ers. It should be a pretty good time, so long as you like seeing the sixth and seventh string guys in. Sorry, Skins fans. It’s been a tough season to endure. A win next week ties us with last season’s record. The losses to the Rams and the Cowboys at home, though, will be all we can imagine for a while.

Going into Saturday’s game up at the Wachovia Center in Philly, the Caps were looking to extend their five-game win streak and take another Eastern Conference rival down a peg or three. After outscoring their opponents 19-9 over the last five games, the Caps certainly seemed unstoppable.

Enter the Flyers, who pummeled the Caps back into reality with a 7-1 smash-fest, four of the goals coming in the third period.

Top performers over the last two weeks include goalie Brent Johnson, who notched 3 wins during the stretch. He is, arguably, the Caps true number one goalie at the moment, with Theodore out and continuing his see-saw play. Sergei Simeon Varlamov proved to be an excellent call-up decision, winning his first two NHL starts and only allowing in three goals. He’s gone back down to Hershey, however, as Theodore came off the IR list yesterday and has rejoined the team.

Caps face the Rangers in MSG tomorrow, with the next stretch of games all against Eastern Conference foes. Positioning is becoming important now and if the Caps want anything higher than a third seed they need to pack on the points, especially with the Conference so tightly packed at the moment.

I wish there was something good to report. I do. But there’s not. The Wizards are still not the Thunder, but the Thunder’s making a game of it. Anemic offensive performance has lead to some truly atrocious line-scores, including the suckfest between the Wiz and the Pistons this past Wednesday.

At this point, I’m fairly certain that Pitt, Clemson or Dayton could pound out a major victory over the Wizards. It’s times like these that makes me wonder if perhaps the British soccer system wouldn’t help teams like the Wiz find their proper place in the world.

Some further news in the Mark Teixeira Sweepstakes: The Angels are Out. That leaves just us, Baltimore (who we’ll beat because Peter Angelos is one cheap bastard), and the Red Sox, who, given the time of day, the wind conditions and the current state of the tide, may or may not be in or out, depending on what Theo Epstein has lately said to Scott Boras. The Nats have offered an 8-year, $160M deal to Teixeira, who’s from Severna Park.

Here’s my $0.02 for Tex. Between you and me, Mark, this deal you’re about to sign, with any of the four teams that have public declared interest and the dark horse lurking in the alley with buckets of cash, will make you wealthy beyond the imagination of the common man. You will be paid a hefty ransom to be either the latest flash in the pan in Boston, or the heart of a franchise here in DC or Baltimore. Tell your agent to break it off with Boston, and come to DC. Give us something to hope for, and we’ll build a team around you. Zimm’s a solid guy but he can’t be the power bat we need. We’ve got a young team that needs a leader, and you can be that guy. Come here, sign the deal, and give this area the sports Christmas present that we need.