It’s nice to see that Gilbert Arenas is back off the bench and in uniform again, but I’ve got to ask: shouldn’t we let him wait so we can guarantee a #1 draft pick? I mean, it was great to see him on the court on Saturday, putting up 15 points and 10 assists at the Phone Booth, but shouldn’t we be conserving at this point? I don’t mean throw in the towel and throw the games, but c’mon. Let Agent 0 play in the summer leagues, don’t risk our draft pick, okay?

Just six games left for the Wizards, and I think it’s safe to say we’ve seen just about the worst performance in years. If they take 3 of the last 6 games, they’ll tie for the worst record in the 36 years they’re been here in DC. I’d put good money that they don’t win more than 2. Sad.

The Caps have clinched their playoff spot, and with just 5 games left in the season, it’s all about jockeying for opponents in the first round. As it stands, the Caps would face the Rangers in the first round of the playoffs, a team they’re 3-1 against this season, outscoring them 14-11. In the unlikely event they finish in third, they’d be facing Carolina, who they’re more evenly matched with.

Can Ovi lead the Caps to the Stanley Cup? We’ll see. 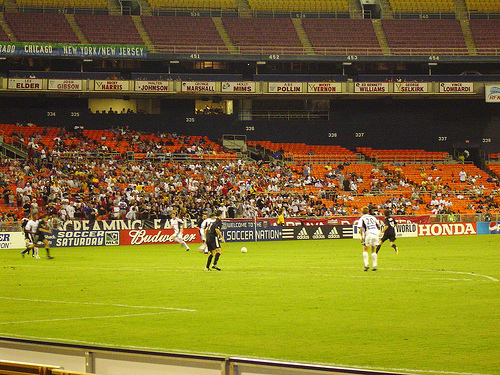 The season hasn’t started out well for United, with a pair of ties to lead off. The best remarks I’ve heard so far have been that no one’s taking any chances on the field, and instead the club is just doing what’s easy, which is pretty tough. Most of the news surrounding the team this year so far, though, has been related to the playing conditions. The team is pushing for a new publicly funded stadium, either in the District, or as of late in PG County.

I’m generally of the opinion that if they move out of the city, they need to leave the DC behind, too. PG United doesn’t have quite the same ring to it, does it? DC United faces off against the Houston Dynamo at RFK stadium on Saturday evening.

Well, we’ve got a rotation. Sure, all of them are under the age of 27, making it the youngest rotation in the majors, but there’s strength in youth, right? The Nats have had a so-so Spring, currently at 13-16-2, which is a far cry from the .300 season from last year. Wily Mo Pena, at one time thought to be the key to the Nats offense, was released this week.

Predictions? Well, we’re just five days from opening day down in Florida, and I think I’ve seen all I need to see. It’s not going to be a normal season in Washington. Attendance will continue to suffer this season, especially given the fact that the Nationals still have really good seats available for the home opener on the 13th. How embarrassing would it be to see President Obama throw out the first pitch at Nats Park before a half empty stadium? Ouch.

There will be nothing normal about the Nats this year. Young pitching, a #1 draft pick that may top the $50M mark, if Scott Boras gets his way, an offense with hints of competency, and a management that’s in more trouble than it says. I didn’t re-up my tickets this year, because I could see the writing on the wall. We’re in for a rough ride.