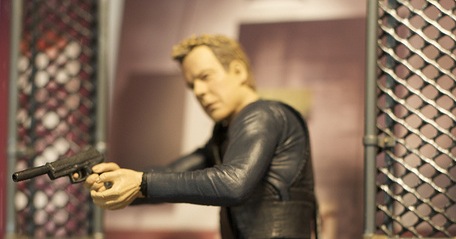 Recap: So, who thinks Jack is good and who thinks he’s bad this hour?

Moss and Alameida whisper sweet nothings to each other while harassing Freckles for satellite imagery. Janis thinks “the subnet is crashing,” which are likely words strung together by people who’ve heard about networks on shows like this one. Surprise! They’re surrounded! Did you really need a satellite to tell you that?

Jonas is nice and indignant about the government’s apparent hostility to Fauxwater. He shakes his cane at Moss and demands that he and his friends get offa his lawn.

Jack Bauer tracks down Knowles, Jonas’ one opponent on the board and secures his cooperation by PROMISING him that there are bioweapons on his company’s base. He then hangs up so he can call Moss, INSTEAD OF PUTTING KNOWLES ON HOLD.

While Moss creates a diversion by punching the turncoat IN FRONT OF 10 GUYS WITH GUNS, Tony just steals a gun off some oblivious mercenary and ducks into a building while no one notices. Apparently he’s a ninja now.

Back at the FBI ranch, apparently the weaponized mad cow is eating Jack’s brain really fast. Refusal to torture people is the first line of prion defense so Jack’s unusually vulnerable.

Jack convinces President Woman President that no really, he KNOWS where the weapons are now. She gets all maternal and checks on how he’s doing since he’s got the mad cow and all.

Li’l Taylor and L&O Crazy Killer Guy have a tense phone exchange where he demands even MOAR inside information or so help me, he will TELL HER MOTHER WHAT SHE DID. Also, he’s at the Roosevelt Continental, which I’m guessing is a way to avoid using the Willard’s trademark?

Knowles’ card key doesn’t work, so Janis does some socket magic on the FBI comm device that Alameida has somehow mysteriously had in his back pocket for an indeterminate amount of time. Knowles runs interference on the Fauxwater goons to give Tony time to get in. Apparently the Fauxwater goons have forgotten that the chairman of the board can fire their asses.

Back at Washington Field, Jack is showing some of the classic signs of mad cow disease. Of course, Creutzfeldt-Jakob actually can’t be transmitted through the air, but hey, who’s keeping track of the science?

12:??
Li’l Taylor is out to meet creepy Reporter Ken, and she is clearly up to something, perhaps a Linda Tripp maneuver. The weapon is a mere 30 miles away! (the base was 13 miles away last week… don’t know wtf that’s about) She makes a brilliant point about operational security while violating it. And apparently Ken is willing to kill the story, for a price. A SEXY PRICE!! *bowchickawowow* I don’t know when 24 became eligible for a public showing at UMD…

Jack gets some medicine for the mad cow he could not possibly have contracted so Freckles can argue with him about the daughter she thinks he should call.

Alameida whups the ass of two Fauxwater guys. I swear, it is SO hard to find good mercenaries these days.

Tony’s got a machine gun, ho ho ho. He confirms the canisters and Jack practically salivates at the possibility of nuking the base from orbit. Tony makes like a tree…

Knowles and Jonas spend some time reminiscing, and Jonas launches into another tirade ala his role in Frenemy of the State. Oh, there was nothing here? How about QUANTICO? Jonas beats Knowles with a blunt object and splatters him all over South America on the map on the floor below his office.

But… oh shit! Fauxwater has detected the FIERY DEATH about to rain from above! They’ve got 3 canisters ready to go, and Jonas wants to call the President. Presumably to make her back off those limits on executive pay.

As Li’l Taylor attempts to pick up her clothes and her remaining shreds of dignity, Creepy Reporter Ken says he’s going to run the story anyway. Li’l Taylor must be rubbish in the sack. But she has her revenge, by turning her Linda Tripp into a Paris Hilton and showing him the cell phone sex tape she made. What’s that, Ken? You have a shrew of a wife?

President Woman President needs Li’l Taylor back at the White House ASAP, because apparently she just can’t face bombing the BEJEEZUS out of the Fauxwater base without her by her side.

Jonas calls President WP and shows off his shiny new bioweapons to prove he’s not bluffing and threatens to launch the weapons in a few minutes if she doesn’t call off the air strike happening in a few seconds. I don’t get it either.

Montage! Freckles looks tense, Jack grimaces and shoots up, and the President runs to the situation room to scream at the admirals until the follow a DIRECT ORDER from the Commander in Chief to abort the airstrike. I bet a male president wouldn’t have to put up with this kind of guff from the Joint Chiefs.

Next week: Hodges arrives at the White House, all 13 missiles are prepared, and Jack grimaces some more.