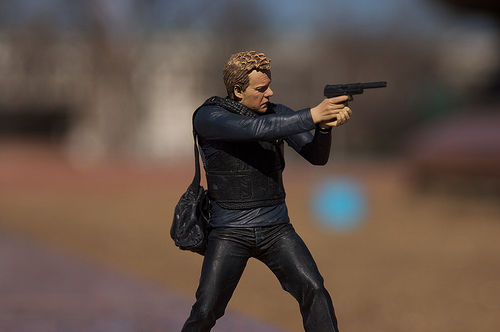 A blonde who will henceforth be known as Redshirt for reasons that are about to become clear is cleared for the White House. Just as she’s getting ready to leave her house, she’s sprayed with something into unconsciousness by someone who LOOKS JUST LIKE HER and steals her access credentials. Awesome.

Tony shoots himself to fake a confrontation. Oh, that wily Tony. Here comes the cavalry.

Kim Bauer tells Freckles she’s leaving, and once again recaps her conversation with Jack, just in case you missed it last week and in the recap this week.

Jack’s being questioned by a guy in a lame shirt. Jack keeps forgetting what he already said due to the MAD COWMGZ, which gives me hope that he’ll strangle the lame shirt guy and forget about it for the same reason.

Freckles finally gets word that Moss was killed in a shootout, making her the lead agent on this operation. Despite the wobbly lip and tears in her eyes, she goes all hardass and starts mobilizing a team for the hunt for the suspect. Even though the place is already crawling with agents.

Jack asks who died and made Freckles boss… and she tells him. Jack barely registers that Tony has been shot as well, so maybe this is the lead-up to the inevitable showdown when Jack tortures Tony… FOR AMERICA. Freckles indicates that the fugitive is about a mile from the Fauxwater compound, which means he’s near Quantico. Which apparently is so close to DC you can double back into the District from it, if you remember that from last week.

Oh, and apparently it’s near 13th and Jefferson in DC, which is deep in Northwest. WTF. Anyway, Jack demands to ride along with Freckles in the helicopter. He’s like a 5 year old, he’s so insistent. He practically holds his breath until she gives in.

So then Evil Parallel Universe Blonde (the one who’s pretending to be Redshirt) rolls up to the White House south entrance, and after a couple of is-this-really-supposed-to-be-suspensful moments while her credentials are checked, she’s allowed in to see her client, Jonas Hodges.

Jonas seems to be under the impression that she’s going to spring him from the White House pokey, and pontificates briefly on “subpoena-waving goon squads,” (REALLY?) but Blondie has other ideas. Oh yes, she promises Jonas that Fauxwater won’t punish his family for his screwup if he takes the suicide pill she gives him. Because, you know, that bioweapon was, and I quote, “Not for personal use.” Really, she said that. I can’t make this up. “Not for personal use.” Deadpan. Like it’s OFFICE SUPPLIES or something. Anyway, it seems like Fauxwater was working for the Evil League of Evil.

Li’l Taylor comes in, and Blondie warns her that her client has invoked his right to counsel, and no one is to speak with him except in her presence. Li’l Taylor says, “In some parts of the world, they’d have shot him already.” OOOO, BURN. (I hear we like to ship people to those parts of the world these days.)

Somehow we’re in a residential part of DC that is a mile from Triangle… wtf… and Robert is wiring a building with C4. He’s a moron who carries the C4 around with the detonators IN IT ALREADY.

And now Jack is going all gushy on Freckles, insisting on talking about Freckles’ FEELINGS, when all she wants to do is be the hardass and catch whoever killed Moss.

And somehow, Tony is walking around normally after taking a 9mm to the gut. Tony tells some bullshit story about how he blacked out before Moss got shot. Apparently blacking out from blood loss doesn’t mean he can’t walk around normally now. Does ANYONE believe this crap? But Jack is looking at the shells recovered as evidence and has suspicions that things are not exactly as Tony said.

Kim Bauer is in a cab on her way to the airport, and on the phone with her husband, Not Zack Morris. She tells him her father is dying, and basically this entire scene is a setup to tell us… Kim has a baby! She and Not Zack have produced a grandbaby for Jack. No doubt, this kid will someday be torturing Osama’s great-great-granddaughter in “24: The College Years.”

Jack’s having an attack, and shoots up in front of Almeida, who apparently didn’t know Jack had been exposed to the MAD COWMGZ. Freckles tells us that the suspect is at 12th and Rincon, so apparently DC is in Puerto Rico now. And in this version of DC, there are abandoned apartment buildings in upper Northwest.

As they’re loading Jonas into the van to take him to the FBI, Jonas notices the tattoo on the soldier’s forearm and asks him if he had run into any Fauxwater units while he was in Pakistan. He wants to know if they were “professional.” I had no idea that Fauxwater employs mystery shoppers. Having been satisfied that his employees are doing their jobs, Jonas takes the red pill. Which breaks my heart, because I wanted to see Bauer have his way with Jonas.

The red pill kicks in, like, instantly, and the truck is diverted to West Arlington Imaginary Hospital.

Meanwhile, Lame Shirt Guy is asking Jack if he’s REALLY REALLY SURE about the name of Tony’s informant. Jack is distracted and can’t concentrate on this REALLY IMPORTANT CLUE, because he noticed that this whole abandoned building thing IS A TRAP.

And Robert the Terrorist blows up the building with a cell phone detonator. He heads into the building, blending in with the FBI by wearing FBI coveralls. Which is why tourons think their street vendor FBI ballcaps are SO AWESOME. Screw you, 24 writers.

Jack seizes control of the situation as we head into commercial, and heads into the building to rescue Freckles.

Tony and Robert the Terrorist meet up, exchange the canister, and freakishly fingerpaint Robert’s face with blood. Gross. Tony puts the “injured” Robert into the ambulance as Jack figures out that Tony is the real TurnTurnTurncoat.

Jack pulls a gun on Tony and goes all Michael Corleone- I know it was you, Fredo. You broke my heart. Tony denies everything and accuses Jack of being all crazy with the MAD COWMGZ. As if on cue, Jack drops to the ground with a mad cow induced seizure. Tony makes the classic villain error and assumes Jack is going to die before he can tell anyone his suspicions, and just walks away.

Meanwhile, Robert the Terrorist knifes the paramedic and commandeers the ambulance… and we’re out for the week.

Next week, miraculously fresh-faced and pink-cheeked, Jack prepares to interrogate Jonas. See you then.