I have to admit–when I think of driving on the George Washington Parkway, fuel efficiency isn’t the first thing that comes to mind. I think more of the feel of the car rolling along the gentle hills and curves, of sneaking glances out at the river and up at the thick green web of leaves, and of blasting the music.

But last Saturday, I got to experience the parkway from a whole new perspective. The crew from the 1,000 Mile Challenge was in town, attempting to eke 1,000 miles from a single tank of gas in a Ford Fusion Hybrid, and world record hypermiler Wayne Gerdes was giving driving lessons.

The idea behind hypermiling is that the way you drive can greatly affect your gas mileage, and that by using special driving techniques you can coax more mileage out of each gallon of gas. Wayne and the Challenge team proved this point nicely. The Challenge began on Saturday morning at Mt. Vernon, with team members driving the Challenge car round the clock. That one tank finally ran out at 1,446 miles.

Meanwhile, I hopped in a replica with Wayne, PR maven Nicole, and a guest from Earth911.com to find out how hypermiling works. 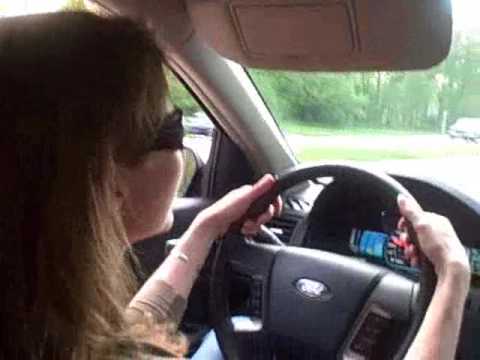 Let me tell you about Wayne. He seems to be a very nice man with great skill and passion, but a man obsessed. Which is to say that driving with him can be a little intense. As the car we drove is a hybrid, the idea is to keep acceleration such that the car neither adds to nor draws from the battery pack and uses the gasoline engine as little as possible. Dashboard gauges let you monitor how well—or poorly—you’re doing this.

When we got to the parkway, the speed limit went up. This excited all the other drivers, but didn’t faze Wayne, who told me to keep it slow. As we crawled along, he introduced the hypermiling technique of Ridge Riding. Did your mother ever tell you that if someone tried to attack you, you should act crazy and they’d leave you alone? Same concept here. When hypermiling, you’re to position your vehicle as far as possible to the right white line, so that other drivers will see you, decide you’re acting wacky, and go around you.

That I am still here to write this piece is testament to the fact Ridge Riding works. But I’m going on record saying that inching along the parkway at 30 mph, in a shiny new car that I did not own, with three people in the car who I’d never met before, while a bevy of DC-area drivers bore down from behind at maybe 60 mph, sure made me sweat. That, and the fact we kept the air conditioning off to save fuel.

Out on the road, we worked on the Pulse and Glide. Pulsing is smooth, steady acceleration that brings up the car’s speed. Gliding is riding out that speed by coasting without using additional fuel. This technique is not to be confused with that nervous, quick, stuttering application of pedal to metal that some folks use to motor down the road. Instead, think of being on a roller coaster. Zipping along GW Parkway on a beautiful Saturday in the Fusion Hybrid, courtesy of ogilvyprworldwide

Traffic at Mt. Vernon gave us the opportunity to U turn. Why drive around the block if you don’t have to? Instead of using the fuel to stop and start at four corners, simply turn around. You might recognize this move as a good way to snag a parking spot in the city. I’m not saying it’s always legal, but it does work.

Wayne also introduced other techniques, such as anticipating what traffic is going to do so that you minimize both acceleration and braking. Braking after acceleration is bad, because acceleration pulls fuel into the engine that is wasted when you suddenly stop. So sailing up to stoplights, corners, and stopped cars is a big no-no. Instead, start braking slowly as much as a block back, and you might not have to stop at all. You’ll also get more mileage out of your brake pads.

I felt more comfortable on the return trip. We drove up to the posted speed, though never above it–speed kills, and speed kills fuel efficiency–and we were routinely turning on the hazards during my glides, in case the Ridge Riding and the car’s large logos weren’t obvious enough. I was getting better at watching the road and the hair-trigger-sensitive gauges at the same time. I wasn’t missing my tunes, with the radio off to save fuel. And my favorite feature of the car was in full effect–as fuel efficiency goes up, digital green leaves grow in the dashboard’s right corner. I was building quite a tree, similar to the thicket out the open window. I achieved a good score on my test drive, an average 70 mpg in a car rated 41 mpg city. And Wayne was happy.

Are you up for the challenge? You don’t need a hybrid. You can buy a scan gauge for any car that lets you monitor your efficiency in real time so you can adjust your driving accordingly.

Or you can just drive smarter, and safer. Slow down; drive the speed limit. Most cars are most efficient at speeds of 30 to 40 mph, so plan your routes to go through town rather than use the highway. Let off the gas on hills. Don’t gun it, especially if you’re coming up to a stop. Get regular tune-ups, and keep your tires inflated. To learn more, check out this hypermiling info and techniques.

And if you ever have an opportunity to drive cross country with Wayne, by all means take it. You’ll be in for a fun trip. Just put him behind the wheel.

5 thoughts on “We Love DC Green: Getting 70 MPG on GW Parkway”