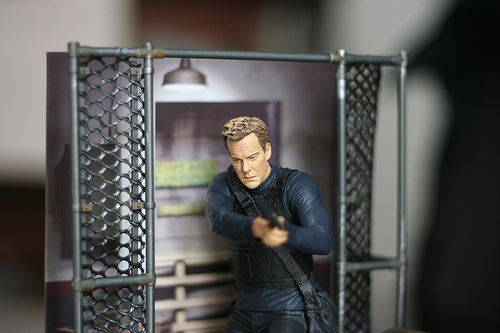 Just four hours left. That’s what I keep telling myself. Over and over. Four more hours until Jack Bauer and his cronies stop giving DC the business. We can do this. Stay strong.

Recap time: The container escaped! Almeida’s a traitor! Time to interrogate Hodges! Li’l Taylor loses her shit! Redheaded Evil and Tony get all hot and bothered over framing a local.

Tony and Redheaded Evil plant a bunch of crap on Innocent Local’s computer. They hang the Universal Banner of Islamic Terror and threaten IL’s brother if he doesn’t make terrorist love to the camera.

Chloe the Wonder Girl tells Jack that the miraculously reconstituted/recommissioned/rehydrated CTU servers have found NO CHATTER from suspected terrorists. NO CHATTER, the same day a plane blows up over DC. Janis gets all righteously indignant, Jack basically tells her to come up with a better idea or STFU.

Then Jack forgets what he’s saying and wanders off to shoot up. Chloe demands to know what’s going on, and Freckles and Janis finally break the news- Jack’s got MADCOWMGZ.

Chloe gets all lip-wobbly while Jack shoots up. Wuss. He’s accepted that he’s about to die, so why can’t she get the hell over it?

Meanwhile, back at Tony’s House of Framejobs, Jibraan is reading the fake terrorist message (in English, wtf) when the MPD shows up. The cops do at least have MPD collar bars, so that’s a nice touch. Tony warns Jibraan not to warn the cops, so he tells them some BS story about how all the yelling was from his drunk friends that he kicked out. He’s sweating bullets, and it’s hard to tell if the MPD believes him or not.

Chloe has finished up all that embarrassing crying and has a lead on how Jack can track down Jibraan. It’s his imam, who lives in the mosque on G Street… in GEORGETOWN?! God people, look at a damn map. 5235 G Street. Seriously. My god.

Li’l Taylor explains to her own personal wet-works guy why exactly it is that Hodges needs to be eliminated. He agrees a little too readily, and heads out.

Meanwhile, the FBI is handing over Jonas’ new witness protection identity. The folder says “US MARSHAL” on the front. Not plural, not WITSEC, not “US Marshals Service.” Just “US MARSHAL.” Like the prop guy has been watching “In Plain Sight,” but not that closely.

Jack and Freckles roll up to the mosque, and I can’t tell whether that beat is the soundtrack or the bass in their sweet ride. Jack goes all crazy on the imam, trying to intimidate him by screaming, but the imam is having none of it.

Meanwhile, Janis reports that MPD (who she calls DCPD, GAH) recognized Jibraan’s photo from the call out to his house a little while ago. Jack and Freckles KIDNAP THE IMAM and head out to, um, Eastbrook Street?

Almeida makes Jibraan tell his brother he’s a terrorist. Jibraan is awfully convincing for making it up on the fly, and little brother spits in his face as the Framejob Crew prepares to head out.

Li’l Taylor is talking to the hitman on her cell phone (so secure!) to arrange the murder. From the White House. (Like THAT’S never happened before.) But hey! Here’s Aaron! Just in time to tell Li’l Taylor that her father is awake, which gives her time to contemplate the BIG GREEN button that sends the money to the hit man, and the BIG RED button that cancels it. She cancels. Surprise.

Chloe the Wonder Girl, not to be out-done by Janis, sees through the deception of the framejob! Jibraan is innocent! Jack looks disappointed, and unlocks the handcuffs he put on the imam.

Li’l Taylor, President Woman President, and First Dude have a touching family moment. How proud they are of their daughter who only mostly ordered a hit!

As Jonas sits, alone in a wheelchair in a hallway at FBI, and says goodbye to his old life, we have what would be a really touching moment if he weren’t such an evil, world-crushing, megalomaniacal bastard.

Jonas is escorted through the shadowy parking garage by only one agent- what could possibly go wrong? He gets into the SUV, the agent walks off to sign some very official-looking witness transfer paperwork, as Jonas sits in the eerie light. What’s that? A COMPLETELY PREDICTABLE SUV EXPLOSION! Jonas is a crispy critter! Uh-oh, now the hitman is going to want to get paid.

President Woman President is meeting with Li’l Taylor and Tim when Tim’s cell phone rings with the news that Jonas has been assassinated. Li’l Taylor turns positively green and excuses herself from the room in a NOT AT ALL suspicious manner. And Aaron notices NOT AT ALL when she goes to hide around the corner in the hallway to have a panicked phone conversation about how she and her contact need to meet in Pershing Park. Which actually exists! Score one for DC!

Freckles, Jack, and the imam (which sounds like a folk rock band) arrive at Jibraan’s appartment. The imam notices that Jack doesn’t look so good, so Freckles reminds us all, in case we forgot, that Jack has the MADCOWMGZ and maybe has only a day to live. Being clergy, the imam is suitably concerned, but still thinks Freckles should be calling the shots.

Jack and the other FBI agents break down the door, and Jibraan’s little brother takes advantage of the distraction to stab one of the actual terrorists in the neck with a shard of glass. Hardcore! But Jack insists they need him alive, so they have to separate the kid from the terrorist, who is bleeding out. DUH.

Meanwhile, Tony is scoping out the intended target of the attack. That’s really a map of DC, but that is SO NOT REALLY A METRO TRAIN OH MY GOD. Would it have been so hard to get stock footage of an actual DC Metro train?

Next Week: Maybe Jack will actually torture someone! There’s a helicopter! It’s almost the end! YAY!