Well, we’re still the worst team in major league baseball. But, in the last two weeks, the Nats have played a lot better than their opening two weeks. Shairon Martis has been pretty much amazing, his last outing with a 5-hit complete game over the Cardinals last week. Jordan Zimmermann’s still 2-1, and though his ERA is over 5, he’s still got a 3:1 strikeout to walk ratio. And, of course, mid-season number-one-draft-pick-to-be Stephen Strasburg threw a no-hitter last week against Air Force. If the Nats can get together with a decent deal with Scott Boras, he’ll be up and pitching in DC by the end of the summer. Ryan Zimmerman’s got a 28-game hitting streak as it stands right now, as well. Get that up to 30 games and maybe he’ll get the credit he’s due. The Nats have three more games on the road against the Giants before coming home for a long homestand. Just think, 9 more wins and they’re at .500. 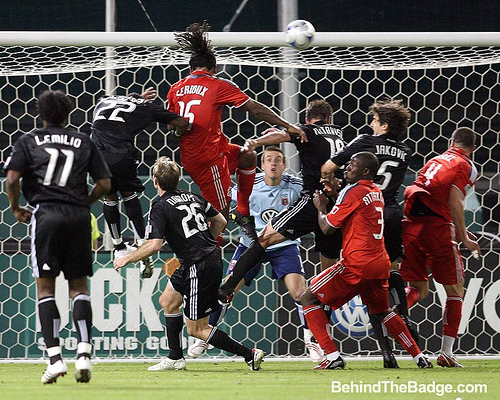 A pair of draws, and a win for D.C. United these past two weeks. A 2-1 victory over FC Dallas at RFK and a 3-3 tie against 2nd place Toronto were punctuated with a draw in Kansas City, where I’m told that DC Fans showed pretty well. The offensive explosion in Saturday’s game against Toronto made for some amazing soccer. Jaime Moreno managed to tie up the match in injury time with a penalty kick, saving the point for United.

D.C. United have the week off before playing at Chivas USA next Saturday night late.

The Kastles launched their season this week with the announcement that they’re returning a stadium to the site of the old Convention Center at 11th and H Streets. This year’s stadium will seat 3,000, and will eventually host the championship match of the World TeamTennis league in late July. Serena Williams be coming back for the Kastles, and the team just announced their draft results for this season. Leander Paes, Angela Haynes, Coco Vandeweghe and Boom Boom Oudsema will take the court for the Kastles this season. They’ve got seven home matches in July, including matches against Venus Williams’ Philadelphia Freedoms, and Anna Kournikova’s St. Louis Aces.