‘Big Mac and fries for lunch’ courtesy of ‘slworking2’

Frankly, I’m surprised it took us this long to gobble this entry right up on the Omnivore’s list.

Ok, I’ll admit it right off – I love comfort food. I don’t like the massive amount of exercise I need to conduct to burn off one of these babies (540 kcals in the burger alone), but sometimes? Totally worth it.

With me having extra time at home lately, I decided recently I needed some alone time with one of my favorite lunchtime pleasures. Don’t dis me – it’s not as expensive as a Ray’s Hell Burger and more convenient for me than a Five Guys. It’s a childhood thing, I think.

Speaking of which, remember the old McDonald’s commercial? 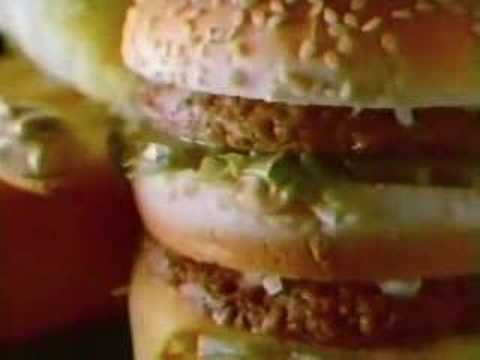 Now that I’ve planted that into your head…

So the Big Mac is a staple of vintage American fast food. Two thin burger patties – combined, they’re still less than a Quarter Pounder’s offering – lettuce, cheese, three parts of bun, pickles, onions…and the special sauce. Supposedly, secret. But most tend to think (and I agree) that it’s a one-off form of Thousand Island dressing.

Now, if you’re not into paying the $5-$7 average for a Big Mac around here, I did stumble on a “ghetto Big Mac” instructional video. Which takes McD’s double cheeseburger (cheap!) and turns it into a very affordable “knock-off.”

Interestingly, when I went to research the burger, I found that the sauce is delivered in sealed canisters and directly dispensed to the burger in a “sauce gun” that is specially calibrated to release a specified amount for each trigger pull. How scientific!

The Big Mac was apparently created by one of Ray Kroc’s early franchisee owners in Pittsburgh (wow, another factoid I did not know), designed to compete with Big Boy. And today, there are a bazillion different versions of this signature symbol of American capitalism in various countries. Some of the more unique ones? In Israel, a kosher version is served without cheese, and in India it’s made with chicken, not beef and called the “Maharajah Mac.”

Now, keep in mind the kcal count is only the burger. But this is the whole Value Meal #1 we’re talking about: Big Mac, fries, drink. So a typical meal – sandwich, medium fries, Coke – will cost you calorie counters 1130 kcals off your Daily Average, not counting whatever dipping choice you use for your fries.

Shocking. That’s almost half of your recommended caloric intake. But is it worth it? When you need something quick and filling, something tasty and decadent, I think so. It’s nearly a complete meal, not some slab of mudpie or triple-layer chocolate cake.

Not that there’s anything wrong with those…