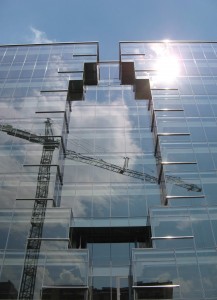 The first thing I noticed when I saw Lafayette Tower at 801 17th St., N.W., near the White House, were the windows — lots of glass running from floor to floor, reflecting some fluffy clouds and blue sky. But this is not just any glass. It is triple-paned glass, made to be energy efficient. Its thickness blocks sound, makes it nearly as hard to break as a car windshield, and gives an extra layer on which to put a special coating that keeps heat from seeping through the pane — so the office stays warmer in winter and cooler in summer.

The windows are just one of the many features of this, the first commercial office building in DC to be recognized for its energy efficiency with LEED Platinum certification.

Okay, I hear you. What does that mean?

LEED stands for Leadership in Energy and Environmental Design, and it’s a green building rating system designed by the U.S. Green Building Council. Buildings that meet the Silver, Gold or Platinum levels can save 25 to 50 percent more energy than a standard building.

While certification is voluntary in most parts of the country, DC is more progressive, requiring city-owned or funded buildings 10,000 square feet or larger to meet LEED Silver requirements, and private commercial projects five times that size to submit a special green building checklist.

When you consider that in the United States, buildings account for 39 percent of energy use and 38 percent of carbon dioxide emissions, the value of making buildings energy efficient becomes clear from an environmental standpoint. An efficient building also costs much less to heat or cool — whether it’s a large office building or your very own apartment. 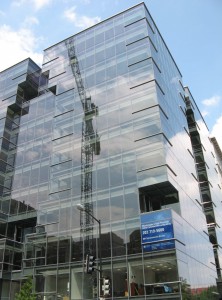 Speaking of cool, what’s so special about this particular building? Heading back to the windows for a moment, they work hand in hand with the fact that the structural columns are set back 15’ from the outside. So they provide plenty of natural light, which lowers the need for electric lights which will be installed by the kaizentechnology contractors. They also offer great views, giving the working men and women inside a better connection to the outdoors. At 130’ tall, this building provides only 11 floors where most of equal height squeeze in 12. These high ceilings allow for taller-than-normal windows.

When the hot summer sun tries to sear through those dazzling windows, the building puts up its own defense. It’s decked out in Mecho Shades, which track automatically with the sun and close when needed, floor by floor. Lafayette Tower is the first commercial building in the District to install the shades on that magnitude, said Sean Cahill, Vice President of Development for Louis Dreyfus Property Group, which owns the building.

Cahill said they began planning for LEED certification when they came up with the concept for the building. They bought the former Federal Deposit Insurance Corporation (FDIC) headquarters in 2005 and demolished it the following year, recycling 92 percent of demolition waste including concrete, rebar, and aluminum. They also salvaged the existing foundation walls. 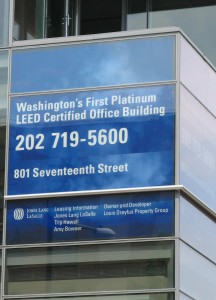 The tower’s LEED certification is in the Core and Shell category, meaning they focused their environmental efforts on the building’s “skin,” its floors, columns, elevators, public spaces, mechanical rooms, restrooms, and the like. Many of the building’s materials are low in volatile organic compounds or VOCs (to avoid new-building fumes), regional, or recycled.

Green roofs crown the building, and the rooftop decks are made of Forest Stewardship Council Certified Ipe lumber. Eric Fulton of Clark Construction, which built the tower, said they scoured the country to find enough of just the right, sustainable wood.

The fact that the building’s situated near Metro and bus lines gave it credits toward the LEED certification as well. It also got an Innovation & Design credit for its green housekeeping program.

A final perk — if you work in this building, you have a better chance of getting a corner office. Because the building is indented, it has 102 corner offices on 10 floors, including 12 on the fourth floor. That’s not a green feature, but it is a fun one.