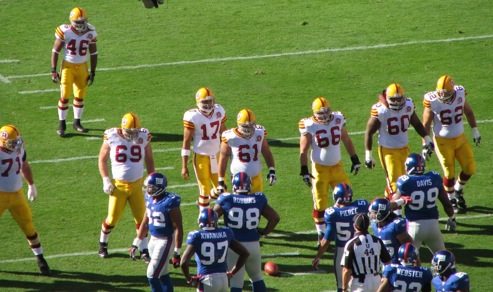 Our Redskins Preview comes to us courtesy of Ben Domenech, editor of the New Ledger, and lifelong Redskins Fan.

Fellow fans of the Washington Redskins, I have nothing to offer you but horrible tales of impending mediocrity and inevitable despair. Oh yes – we suck again.

If there’s anything I’ve learned from 27 years of cheering for the Washington Redskins, which my mother swears began when I was still in diapers, it’s that under Joe Gibbs, the Redskins are at least a respectable franchise, and occasionally a good one. The Gibbs years of old were magnificent, yes — something I’ve appreciated all the more as I’ve gotten older. We’ve since been able to appreciate both the cheap suckitude of the flailing Norvous years of the dying squire, and the expensive, flashy suckitude of Dan Snyder’s entertaining obsession with shiny objects.

What do you have at the end of all those years, with great players and terrible players come and gone? A team that will beat teams they should, lose to teams they should, and still, somehow, command your pocketbook like none other. The offseason for the Redskins this year was a relatively modest one. They just bought the Defensive MVP on the open market for a handsome price, powerful mammoth Albert Haynesworth of Tennessee (ho hum). They brought back the once-overpaid Derrick Dockery, a top-shelf Longhorn left guard (offensive lines, who needs ’em). And they added perhaps the best defensive player in the NFL draft in Longhorn DE/LB Brian Orakpo, continuing their practice of making really good picks in the first round, where it’s really clear who they ought to take (you shoulda taken Mark Sanchez, he’s so pretty, he looks like that guy from Entourage!).

But no one cares, because all they want to talk about is the quarterback. Twenty-eight year old starter Jason Campbell is the target of massive ire from nervous fans (DC’s idiotic sports radio community, particularly the bitter and depressed Andy Pollin of Snyder-owned ESPN 980, love a QB controversy to liven things up) but it’s been squelched a bit by the poor play of beloved Hawaii third-stringer Colt Brennan (whose cult-like following will hunt down and destroy anyone who speaks his name in vain) who may not even make the team thanks to rising Mizzou playcaller Chase Daniel. Campbell’s play is not particularly impressive — while physically gifted, strong-armed, and a good protector of the ball (his interception count last season was incredibly low), he’s just not a world beater.

In many ways, on paper, Campbell has marked similarity with Ben Roethlisberger of the Pittsburgh Steelers. Last year, Campbell had a higher quarterback rating, 46 fewer yards passing, a completion percentage two points higher, four fewer touchdowns but nine fewer interceptions than Roethlisberger. Roethlisberger had the top defense in the NFL, while Campbell had the fourth ranked. Yet when you watch the two play, there’s a marked difference in personality — a difference between the consistently average and the occasionally great — and that difference begets a dramatically different result. Big Ben’s coolness under pressure behind a questionable line helped the Steelers to another ring, while Campbell’s O-Line fell apart and the Redskins couldn’t get turnovers (or do anything with them) down the stretch. Hence the very public flirtation with Sanchez and Jay Cutler, now respectively on the Jets and Bears.

You can’t blame Campbell’s inability to make the leap to the next level on the front office. If you step back and look at the overall picture of the Redskins’ additions, they actually make football sense — what’s more, this is maybe the third year in a row that they’ve made sense. They added a quarterback-grooming coach in Jim Zorn, passing on more glamorous retreads. They’ve gotten out of the practice of overpaying guys who are in their thirties, and are now solidly overpaying guys in their late twenties. They’re no longer engaging in ludicrous projects like teaching Adam Archuleta to cover and Brandon Lloyd to catch, and are now engaging in less ludicrous projects like teaching Orakpo to cover and Malcolm Kelly to not tear a hamstring when he brushes his teeth. This is a break from the Redskins of most of Snyder’s tenure — it’s still flashy, it’s still overhyped, it’s still destined for mediocrity, but it makes a good bit more sense than what they used to do.

Football teams have windows of opportunity in the NFL. They have a handful of years to make a run, usually tied to the tenure of an established quarterback paired with a solid defense. Pittsburgh is in the middle of their window right now, as is San Diego and Baltimore — for the Colts, the Eagles and New England, those windows may be closing. Looking at the Redskins of 2009, it’s hard to feel like this is a team that has several good years ahead of it. While the defense is young and solid, the offensive line is one of the oldest groups in the league, and it’s thin to say the least — young talent like RT Stephon Heyer and RG Chad Rinehart look more like backup quality players than starters. Stud running back Clinton Portis likely has only two more years of life, if the 30-year mark for RBs in this NFL holds true, wideouts Santana Moss and Antwaan Randle El are aging, and last year’s crop of second-round pass-catchers has failed to impress thus far. Once again, this looks like a team that will hold opponents to low scoring outputs, but be frustrated from putting points up on the board.

If Campbell fails to deliver a next-level performance this year and the Redskins turn in another win total between 7 and 9, it’s likely that Snyder will pull the plug on the whole thing. A remade offensive line, a new quarterback, and assuredly, a new coach — Mike Shanahan, Jon Gruden, and Bill Cowher will all be in the mix for what should be an incredibly well-paying job. Given the rather difficult looking schedule this year (in November and December, the Redskins play only two teams that had losing records last year) and the strength of the NFC East, this is a result that seems more likely than not.

Let’s say this for Snyder: for all his faults, the man is still a fan at heart. The guy who once told a reporter he’d gladly cut off his own finger to beat the Cowboys is willing to pay anything to get a ring. But sometimes if you love something that much, you have to let it go.