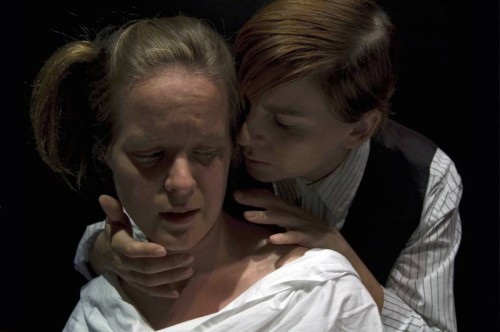 Esther Williamson as Isabella, and Kimberly Gilbert as Angelo
Photo by Kristin Holodak

“Measure for Measure” could be described in simplest terms as a “he said, she said” kind of play. When fellow author Don shared his thoughts on Taffety Punk’s current production with me, it fascinated me that we had two disparate views. So why not mimic the play’s conceit and split the review?

Before we go into it, plot please? The leader of the free world gives it all up temporarily for some meditation practice, leaving a stuck-up prig in charge as a test. The prig goes to town cleaning up the junkies and whores, jailing a reprobate with a hot virgin as a sister. Virgin begs for her brother’s life, prig will give it if she sleeps with him. All hell breaks loose with the leader working the marionette strings behind the scenes.

At least, that was how my professor described it.

She Said (Jenn):
I loved Taffety Punk’s last Shakespeare romp, “Romeo & Juliet,” which was invigorated by the all-female cast and their scrappy challenge to Shakespeare Theater’s all-male version at the same time. The choice of following it up with “Measure for Meaure,” a difficult play even for the highest calibre of companies, was certainly risky.

When chaste Isabella is blackmailed by conflicted Angelo to give him her body in exchange for her brother’s life, it’s a horrible moment that reverberates to this day, even in this Age of Shamelessness. It’s disappointing, then, when a production fails to make palpable connections between Elizabethean and modern morals. With all the sordid political scandals involving sex these days, I was mystified by the production design’s inability to do other than look like a bad Vicars & Tarts party. The performances, however, all clear and committed.

Jenn was more disappointed, but I share her conclusion: this show does not match the level they reached with their last all-female production, last year’s “Romeo & Juliet.” That’s not a reason to stay away; the fact that they make such a dated story as accessible as they do is to their credit, and the energy they bring is a great answer to the very reasonable question of “what does theater have to offer that my cable tv doesn’t?”

Jenn Said:
With a cast featuring some of the most talented actresses in the city, what this production doesn’t lack is finely etched performances. Esther Williamson shines as Isabella, a strong-willed novice caught between wanting to save her brother’s life and maintain her dignity and virtue. Kimberly Gilbert’s Angelo is most alive in the moments when fighting the lusty demon inside – Gilbert’s never afraid to dive right into a character’s neurosis, and in this instance she attacks with abandon.

I also found Tanya Beckman Ross’s Mariana to be a standout, visually and vocally compelling. Mariana may be damaged goods, spurned by Angelo, but Shakespeare gives her one of the truest, most forgiving lines – “They say, best men are moulded out of faults,/And, for the most, become much better/For being a little bad.”

Don Said:
Kate Debelack is in the show, and is a close friend of mine. So feel free to take with a grain of salt any observations I might make about her performance, which I found to be delightfully ebullient as scalawag Pompey.

I was also delighted with Tonya Beckman Ross’ portrayal of Mariana, the spurned lover driven practically into psychosis by her rejection by Angelo. There’s everything to like in the performances up on stage all around, with some wonderful movement and physical comedy. Just as excellent are the many little unspoken moments when characters get unexpected insults, reprieves, and come-uppances and speak volumes with just a look. 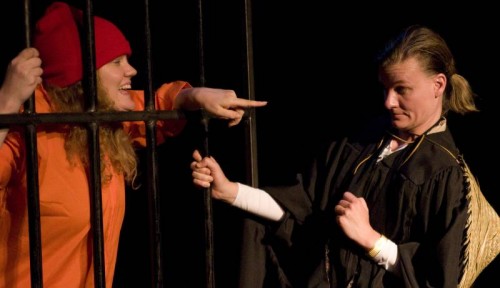 Unfortunately there’s little to love in the surrounding physical attributes of the show, primarily because of a lack of cohesion with the props and decoration.  The Post’s Nelson Pressly comments on the most egregious offending items: the odd overly-high chairs in the back of the room where Angelo and Escalus sit to pronounce judgment. They’re weird, which would be fine by itself, but how they’re used becomes a full-out distraction.

In the middle of an intense scene between Angelo and the object of his lust, Gilbert is called upon to ascend and descend those chairs repeatedly, with no hint of awareness that it’s an odd and undignified move for such a tightly-wound character. Director Lise Bruneau could have left Gilbert in one place for more than a second or fully embraced the contrast between the movement and Angelo’s demeanor, but instead does neither. It’s an odd middle-ground for a company prepared to not just put Paper Bag in the play, but give him (her?) a credit on the company’s troop member page. It would be less troubling if we hadn’t seen them really use this kind of thing to good effect last year with Juliet’s balcony being represented as something akin to a jungle gym.

Jenn Said:
Really the bottom line is one of consistency. I can’t fault Taffety for efforts which are making the best with what they have – a minuscule budget and an extremely difficult space. If Mariana is right and things are better for having a little bad, then there’s no reason you won’t enjoy this production. I just want them to commit a bit more fully either way on the next play- is it Over The Top kitsch? Is it Absurdism? Make a choice and go all the way with it. They’ve proven themselves capable of doing so with “Romeo & Juliet.”

Don Said:
For $10 – and once in a while even less than that if you sign up for their mailing list – it’s a few hours well spent and a small price to pay to support people doing something interesting in the live performing arts.