‘For rent’
courtesy of ‘quinn.anya’

If you’ve gotten off the metro in any of the suburbs you’ve probably seen big apartment advertisements offering large giveaways. If that wasn’t enough confirmation for you that the rental market is a soft, perhaps a report on apartments in our region from Marcus & Millichap will help.[pdf, free reg required] There’s some interesting info in that report and if you’re coming up on a lease renewal maybe we can help you use it to get yourself a better deal.

Part of why you see those snazzy banners with equally big offers is that the hardest-hit market is the “class A” asking rents, the higher priced places like Crystal City and along the Connecticut Ave corridor. Not all of the top-price spots have been hit though – some places like Dupont are bucking the trend for now because of their desirability. However overall vacancies are up and it’s unlikely that any region is going to be totally free of a hit; the M&M report says there’s just as many properties coming onto the market this year as last,  meaning more spots to fill.

More interesting is that many of the lower-priced rentals actually have ticked up marginally, perhaps because of people who are more down on their luck and looking for cheaper options. However they also are seeing vacancies rise, so this might be a brief lag about to be followed by more drops.

Let’s dig a little deeper and talk about how it might help you.

Marcus and Millichap are a real-estate investment operation, so they are interested in employment only as far as it impacts them. They do comment that the job losses in DC are expected to be about 1% of the workforce this year, a doubling of the jobs lost last year. No big surprise there, but the chart is interesting. When the nation as a whole took a sudden dip and into negative growth in 2007 we just marginally increased the slowing of growth. We didn’t actually start shedding total jobs till 2008, when nation-wide losses actually slowed. 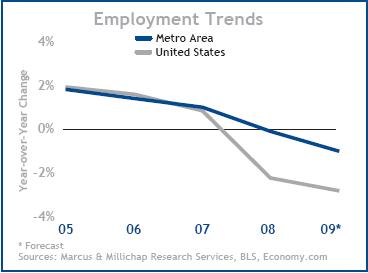 The above chart is the only one where we diverge notably from the nation; in home prices, vacancy rates, and asking rents we’ve moved mostly in lockstep with everyone else.

The bits that are most likely to matter to you, renter, are monthly rents and vacancies. The M&M report says “tepid demand will depress asking rents 0.7 percent to $1,355 per month, while effective rents will retreat 1.9 percent to $1,282 per month.” That’s after seeing both those numbers go up in 2008. Vacancies by year’s end are expected to be at 6.8%, an increase exceeding 1% over last year, which saw a 0.8% increase. Considering the decreased demand and slipping prices, if you’re coming up on a lease renewal and happy where you are you might consider asking for some concession. You can search the net for “negotiate rent decrease” as easily as I can if you want some ideas about how to approach it. Most of them tell you to “do your homework about the market and prices,” so now you have that done. Let’s make sure you understand it and some facts about the folks you rent from.

That whole percentage point difference between “asking rent” and “effective rent” is important to you if you push back on a rent increase or want some sort of concession from your landlord. There’s a difference there because landlords have opted for those “X months free rent!” offers rather than a simple monthly decrease. Cutting rents means a percentage increase in a future year will be a smaller amount.  Even though that free month is effectively an 8% decrease on what you’ll pay for the year they’d rather do that than make a permanent downward adjustment of 2%.

It seems odd to most of us, but it’s for part of the same reason Best Buy will offer big rebates rather than just lowering the price of an item: consumers don’t like it when prices go up. They get actively annoyed when they pay more than someone else did. It’s illogical, but your landlord gets less grief from a big giveaway than they do if a tenant finds out they’re paying $50 more a month than the Joneses.

Additionally, depending on where they are, landlords may be constrained by law how big a jump in monthly rent they can make every year. A free month gives you a discount without lowering their long-term appreciation. If they cut your monthly cost and the market rebounds aggressively next year then they will be trailing behind and unable to catch up to market price. If you’re nervous about going after a concession, the most useful additional tip I saw in a quick search was this: if asking face-to-face makes you anxious, just write a short letter. All I’d add to that is some advice I saw years ago in a discussion about “Getting to Yes:” if you want someone to do something for you, make it easy for them.

Don’t just state your problem – other people are paying less in the market – or their problem – you could go somewhere else, leaving them to fill an empty unit in a weak market. Propose a solution, and sell it: include a suggestion, such as a free months’ rent in your next term, and be prepared for a counter-offer or with alternate suggestions. If you just drop the ball on their lap they may not know how best to deal with you. “Whuddaya gonna do about it?” makes good dialog in a gangster movie, but in real life you don’t want to make the other person question exactly what it is you want.