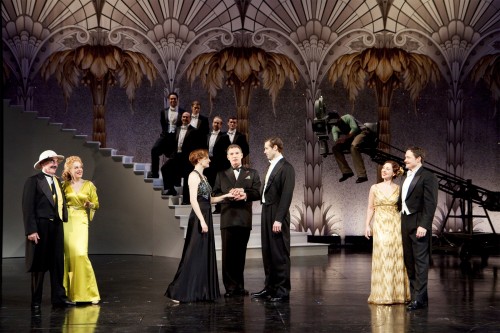 The cast of the Shakespeare Theatre Company’s production of William Shakespeare’s As You Like It, directed by Maria Aitken. Photo by Scott Suchman.

For the first thirty minutes of Shakespeare Theatre Company’s production of “As You Like It,” I was entranced. The characters were on a journey through the history of American cinema, and the first scene’s send-up of a silent film had the audience delighted. Director Maria Aitken’s evocation of that era was perfect, from the stylized acting and Basil Rathbone-ish villians to the exquisite design elements. Then, we jumped ahead in time. She still had me with the move from Puritan England to Valley Forge America, the exiled duke and his men becoming George Washington and his ragtag soldiers.

But when we arrived at Tara and saw Scarlett O’Hara, my eyes began to hurt. By the end of some three hours of constant location and time changes through the Reconstruction, Wild West and up to a Busby Berkeley musical, I had a migraine. There was a faux movie director on stage occasionally calling “cut!” – but what this production really needed was a better editor.

I normally don’t object to Shakespeare productions that take sweeping liberties or use radical conceptualizations. After all, these are plays that have been done repeatedly for centuries, and they need a face-lift sometimes. But I do object when concepts don’t serve the purpose of the story. And this one, as beautiful as it is, does not.

It also must’ve cost a bundle, as one audience member muttered under her breath when a large neon sign shone for just one scene.

I don’t fault Aitken’s ambition, merely the execution. It’s a testament to her skill that the acting is top-notch. Francesca Faridany’s lanky Rosalind makes an engaging Rosalind, reminding me in her cross-gender Ganymede scenes of Katharine Hepburn. John Behlmann is a genuinely sexy Orlando, with a melancholic edge that fades into glee as he swings across stage declaring his love. But as the two lovers move through the many genres we lose the connection and the heat that should exist between them.

My two favorite performances were Mark Capri as both the exiled Duke and his wicked brother (a common casting conceit these days which he performs with both subtlety and wit – he has quickly become an actor I look forward to seeing), and Barnaby Carpenter as bad brother Oliver, whose conversion to the good side is most believable. He also gets to shine for an intense moment in the only scene where I felt the concept worked perfectly to serve the plot – dancing with a dreamy drugged Celia (a plaintive Miriam Silverman) in a seeming homage to famed choreographer Agnes De Mille.

This moment, filled with spot-on music by Michael John LaChiusa and choreography by Daniel Pelzig, made me long for what could’ve been – keeping the production firmly rooted in that cowboy musical world of the 1950’s might’ve been as revolutionary as keeping it in Valley Forge. But, we had to move on. With characters changing accents as well as costumes, it’s hard to care about any of them beyond admiring the cleverness. The production design is as gorgeous as always at Shakespeare, but it serves the director’s concept more than the actual plot.

I’m lucky to be very familiar with the plot of “As You Like It,” having costume designed it, but even with my knowledge of the script there were moments I lost it with the constant genre changes. So if I was having trouble, I can’t imagine how the experience was for someone coming fresh to the play. The buzz at intermission? Many comments from a very erudite audience confused as to the logic behind the time/genre jumps and having difficulty following characters through the basic storyline. That’s why I won’t even bother to outline it for you – it just isn’t there.

Again, I admire Aitken’s ambition and the general idea – certainly the Forest of Arden, where all the misfit characters end up, can easily be an immigrant’s experience coming to America. But that’s where the prism should stop. You don’t need more than two genres. Call “cut.”

One thought on “We Love Arts: As You Like It”