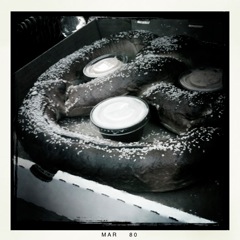 Special to We Love DC by Hal Mangold

Let’s get one thing straight right now: The Washington Nationals probably aren’t going to be very good this year. They might be bearable, even fun, to watch, but expecting them to be anywhere other than knife-fighting in the basement of the NL East is probably too much to ask given the catastrophic 2009 season. I’m pretty sure the brass over at Nationals Park are well aware of this, and at the very least it looks like they’re trying to make sure that coming to DC’s temple of baseball has other attractions than what’s on the field. So it came to pass that on the stunning Spring day that was yesterday, the Nationals rolled out the PR red carpet (literally, as it happens) and guided a motley band of local TV, radio, print and online media around Nationals park to show off the new polish that’s been applied to the place. There’s something kind of magical about walking around a mostly empty ballpark, and the weather couldn’t have been better for it. 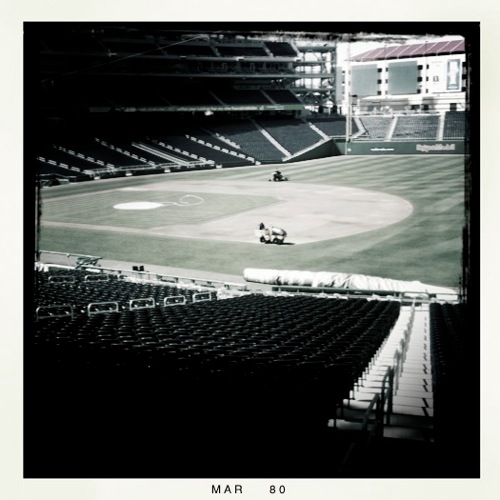 So, what’s new? Well, to start with, season ticket holders will probably be quite pleased to hear about two red-carpeted, velvet roped entrances at the Center Field gate that are just for them; If you can’t field an elite team yet, you might as well feel elite when you get to the park. Also, the Diamond Club has been extensively renovated, if you move in the sorts of circles that get you in that pricey venue often. The top two rows of seats outside the Red Porch/Red Loft have been replaced by tables that can be reserved in advance for a 90 minute period, and the upstairs has new railings installed for your drinking/game-watching pleasure. The Scoreboard Walk bar (now directly sponsored by and co-branded with Miller Lite. Um, yay?) has been retooled as well. It’s going to be 21 and older only, and offers $5 beers starting 2.5 hours before each game. They’re really pushing the place as a hip, hot hangout, with new lounge furniture, some games, and some promised promotions with other DC venues. Admittedly, the first thing that occurred to me way “We’re going to give visiting Phillies fans three whole hours to get tanked for cheap before games? Aieee!” There are also two new cheap parking areas to replace the RFK Shuttle. Lot HH is located at 100 Southwest Freeway, SE, and Lot W, at 600 L St. SE, will both feature $5 and $10 rates, By the way, the claimed reason for the discontinuation of the RFK shuttle was that “people were just using it less and less”. One has to wonder if, just maybe, the fatalities from last year had anything to do with that.

New food offerings seem to be one of the bigger changes for 2010. The Triple Play Grill will offer shrimp po-boys, crab cake sandwiches, and a bizarre hybrid of fish and hotdog called the sea-dog. A Taste of the Majors features 5 different foot-long hotdogs, one for each team in the National League East (the sea-dog re-appears here as well, representing the Marlins). There’s also a chicken and waffles sandwich (tried it, not bad). And hey, if you’re feeling really crazy, there’s the Victory Knot: a TWO POUND soft pretzel, with three different sauces. (The beer cheese is the best of ‘em, honest.) If you’re trying to dodge a date with a defibrillator, on the other hand, the new Healthy Plate cart will actually have some wraps and snacks that your doctor might not give you hell for eating. And, of course, you can still get cupcakes in the park, because God forbid you shouldn’t be able to get a cupcake anywhere in DC.

On a less snarky note, one pretty nice thing is the “Bring a Smile to Haiti” toothbrush drive that the Nats are running with Gifts In Kind International. Fans can donate new toothbrushes for use in Haiti, and a portion of ticket proceeds for the April 6th-25th games will go to Gifts in Kind International and the National Organization for the Advancement of Haitians. It’s a good cause.

Oh, and one more thing. Unless you’ve been living in a hole in the ground for the last week, you’re aware that President Obama is throwing out the first pitch at the Nationals home opener (the 100th time a sitting President has thrown out a first pitch at a baseball game, we were proudly informed). Security at the park that day is going to be incredibly tight, so it’s recommended that you arrive at the park a full 90 minutes earlier than you might otherwise. Gates open at 10 a.m., so let’s play some ball!