Jello Biafra will turn 52-years old in June but you wouldn’t know it from listening to his new album “The Audacity of Hype” or by watching his punk-as-f*ck live show. Fueled by a combination of unyielding political outrage and a bottomless reserve of poetic wit, Jello Biafra has been calling it like he sees it to anyone and everyone who will listen (and sometimes to those who refuse too) for over 30 years. Biafra’s various political platforms have included his legendary, California, punk band, The Dead Kennedys; numerous musical collaborations, several spoken word tours, and most recently his first ‘official’ band in 25 years, The Guantanamo School of Medicine.

“The Audacity of Hype” is a collection of songs Biafra has written over the last decade beginning with two tracks he performed (but never recorded) in 1999 with the No WTO Combo. Lyrically the material on the album is Biafra’s strongest work since the Dead Kennedys split in 1986. The album paints a portrait of corporate interests run amok, the disaster of the G.W.Bush era, and the short-comings (in Biafra’s eyes) of the Obama administration thus far. Whether you agree with him or not, if you appreciate great political song-writing “The Audacity of Hype” is a must listen. The last time I saw Jello Biafra perform also happened to be my first time. The show was at the Black Cat in 2005 and Jello was performing with The Melvins. I was obviously impressed because the show made #4 on my best shows in DC list that year. Based on the strength of the new album and the quality of the 2005 Jelvins show, I decided to catch the Jello/Gitmo show at the Ottobar on Sunday and their show at the Black Cat on Tuesday.

Jello Biafra in concert is difficult to describe. His shows are full of energy, passion, (fake) blood, sweat, anger, humor, rhetoric, slam-dancing, and mimicry. Both shows this week featured amazing punk rock music, mini-lectures calling out administrations past and present for unanswered sins, calls to action against political lethargy at large, information about little known injustices, and of course insane stage antics. In a sense Jello Biafra is pulling off punk rock, poli-sci, kabuki theater.

Both shows began with Biafra taking the stage in a lab-coat, his rubber-gloved hands dripping with (fake) blood. While the band tore through the album opener ‘Terror of Tiny Town’; Jello sang, danced, contorted his face, smeared blood all over his lab coat and face, and basically owned the crowd. The Guantanamo School of Medicine are a band of bad-ass punk musicians. Veterans all, they played a punk sound that was Dead Kennedys by way of The Stooges. Their dual guitar attack allowed for the DK surf-twang to wind itself around the deeper, gnarly Stooges’ guitar in inventive ways all night. The rhythm section were the beast, delivering chest-thumping bass that kept the kids dancing non-stop.

Jello delivered spoken word introductions to each song explaining their context or expanding on their themes. At the Ottobar show these introductions were much longer, more in-depth, and often involved props (such as a well-thumbed through copy of The Immortal Life of Henrietta Lacks; I don’t think I have ever seen a singer whip out a hardcover book and lecture on it at a concert before). These political asides sparked cheers of agreement, shouts of anger, and heckling through out the night; but refreshingly, particularly with the amount of alcohol being consumed on-site, no violence. At the Black Cat, Jello kept his introductions shorter but increased the manic fervor with which he delivered them.

Both shows featured the same set-list which included the entire “The Audacity of Hype” album, three non-album tracks: the anti-gentrification ‘Dot Com Monte Carlo’, the pro-veterans/anti-depleted uranium ‘Victory Sucks’, and ‘The Cells That Will Not Die’ deriding the exploitation of Henrietta Lacks’ biology; and of course a couple of Dead Kennedys classics, hand-picked and re-tooled by Jello because of their relevance today.

The Ottobar show featured better stage antics, an on-point professor Biafra, and a more politically engaged crowd; the highlight being the performance of the anti-prison industrial complex song, ‘Three Strikes’; during which, 51-year old, Jello Biafra climbed off the stage, attacked the balcony, climbed into it, and sang the song while desperately squeezing through the balcony railings evoking the very prison bars he was singing about! Talk about using your performance space for maximum effect!

The Black Cat show was all punk fury. While this show also featured Jello’s crazed stage show and rhetoric, it was all a little more rushed and forceful. Less a community thing, more of an assault. The band sounded EPIC at the Black Cat; a fact they must have noticed at sound check, because they really brought the house musically on Tuesday. The highlight of the Black Cat show was without a doubt the performance of the DK classic ‘Holiday in Cambodia’ sung by a shirtless Biafra and enhanced by The Guantanamo School of Medicine’s muscular instrumentation.

Both shows were phenomenal experiences and I wouldn’t be too surprised to see the Ottobar concert wind up on my best of 2010 list in December. 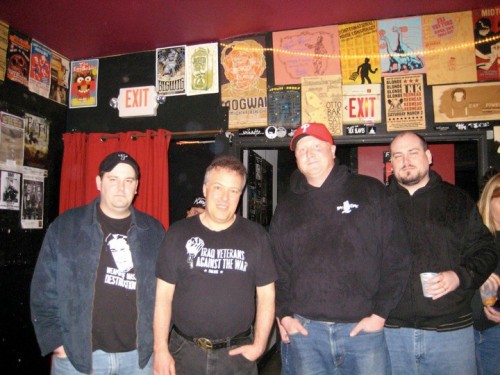 “Jello Biafra with the Darpino brothers” – courtesy of Maribeth Darpino.