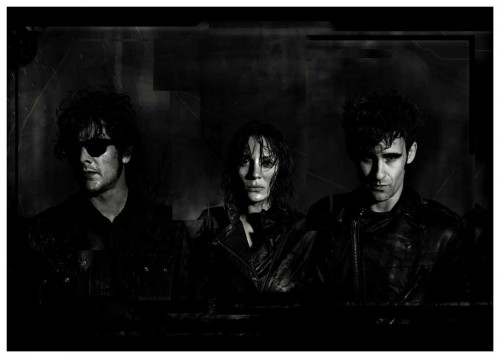 Black Rebel Motorcycle Club rumbled into town on Monday night to subject a sold-out 9:30 Club to a shock and awesome display of rock-n-roll annihilation. Touring in support of their latest long-player, “Beat the Devil’s Tattoo“, BRMC embraced that album’s raw power style to play a set that was fast, loose, and loud. So loud that it often felt like the band was testing the audience’s commitment to BRMC’s maximum rock approach. The noise assault drove fans out in staggered waves through the set but left behind a sizable core of diehards to truly enjoy the display of sonic audacity and seemingly-effortless talent being unleashed on stage. Being a long-time BRMC fan, I was a bit shocked at the levels with which they could still manage to surprise and impress. After many years of watching Black Rebel Motorcycle Club perform, their Monday night, aural brainwashing made me feel like I was seeing the band for the first time all over again.

I have been an acolyte to the church of Black Rebel Motorcycle Club and their country-fried, shoegazer, blues-rock for a long-ass time. They have made it onto my year-end, best-of-DC, concerts lists three times before (2007, 2006, top honors in 2004) and, unless this year gets crazy-good, will probably make it onto 2010’s list as well. Black Rebel Motorcycle Club are repeat offenders on my lists because every time I have seen them perform they offer a new perspective on their great rock-n-roll show. The first time I saw them in 2004 the show was all about atmosphere and cool. In 2006 they hit DC twice, first with a folksy/blues rock-out and then a few months later with a plugged-in fuzz-fest. In 2007, they brought their most polished show-yet, featuring an extra guitar-player, they focused on the expansive nature of their catalog, embracing every subtle note swirling around inside their huge, bombastic moments.

Monday night’s show was no different in how different it was from tours past. Gone was the well-rehearsed, beautiful delivery of ’07; gone too was the red-light, atmosphere of ’04. On Monday night, Black Rebel Motorcycle Club brought the noise. I have heard them work the 9:30 Club sound-system better than almost anyone to produce shows of stunning beauty in years past. On Monday night, BRMC threw that approach out the window. Dialing everything in the sound-booth to max dBs and their amps to Spinal Tap 11, they took to the stage and let the Kraken loose. In a way this show was the most like The Jesus & Mary Chain that I have ever heard BRMC play. They played every moment so loud that the air itself began to vibrate and hum. For two hours and fifteen minutes the audience was trapped on the bleeding edge of sound; for some it was bliss, for others not so much. I personally loved every second of it. Guitar, bass, drums, vocals all bled together to create a primeval racket that had us feeling like banana slices trapped in a giant, jiggling, jello mold. You know you are witnessing pure-rock intensity when your car-keys are vibrating in your pocket and your drink is playing like it’s an insert shot from Jurassic Park.

As I mentioned earlier, this was the least rehearsed I have seen BRMC play. That is not to say BRMC performed poorly. What I mean is that they didn’t focus so much on big, dramatic moments or precision delivery like they usually do. Much like their new album, the show was a little sloppy, and that worked brilliantly in amping up the rock-n-roll sincerity of the whole thing. No surprise then that the songs from the new album sounded the best on Monday night. The highlights of the new songs were ‘Bad Blood’, ‘Aya’, and ‘Shadow’s Keeper’. There were bass sounds produced during the performance of ‘Aya’ that were so mind-blowing, they had to have been the coolest sounds on planet Earth at that given moment.

The show heavily featured BRMC’s full catalog, particularly in its second half. The older songs sounded fresh with Monday’s looser renditions. The material from their brilliant album “Baby 81” benefited most from this; especially songs like ‘American X’ and ‘Berlin’. ‘American X’ was one of the highlights of the entire show featuring a brilliant vocal performance and an awesome noise jam in its second half. Other back-catalog, highlights of the night included ‘White Palms’ with its unbeatable cool-vibe, and surprisingly (to me anyway) ‘Ain’t No Easy Way’ from “Howl“.

Without a doubt the best moment of the evening for me was their intense performance of ‘Six Barrel Shotgun’. It was the moment when the in-your-face, volume matched the material so perfectly that you just had to close your eyes and give in to music nirvana as the insane wall-of-noise washed over you. It was the perfect illustration of what Monday night’s show was all about; straining the sound-system to its breaking-point with down and dirty rock-n-roll to provide musical, freak-out bliss to a house packed with BRMC devotees like myself. My ears are still ringing as I type this and I am already jonsing for more.