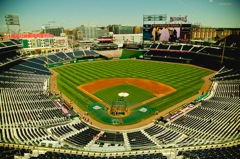 In front of a Saturday afternoon crowd of 21,633, the Nationals and Matt Chico held on to the team’s winning record.  The Nats, now 16-14, remain a game behind their 2005 selves for best start in team history, but it’s all about momentum for this club.  After the game, manager Jim Riggleman said that, “Sometimes you get a little lucky,” and it was luck today that prevailed for the Nationals.

The Marlins sent Joel Johnson, previously 6-0 against the Nationals, to the mound with hopes to curb their losing ways, but it was not to be. The Nats struck in the fourth inning, putting together an Adam Kennedy single, a Josh Willingham triple off the right field fence and a Willie Harris yard shot to go up on the Fish 3-0.

Matt Chico, in his first start back after Tommy John surgery, went 5+ innings, limiting the damage to 2 runs, and notching three strikeouts against the Fish.  He looked excellent through five, but coming back out to the mound in the sixth, he was quickly in trouble.  He gave up back to back singles to Sanchez and Ramirez, and then an RBI double to Cantú in very short order.  Riggleman saw enough and sent for Miguel Batista, who managed to get the Nats out of trouble and preserved their lead at 3-2.

Chico would not draw the decision, though, as Florida would rally in the 6th, with Gaby Sanchez sending a 2-1 pitch well into the left field stands off Tyler Clippard. Clippard came in to relieve Burnett after just two batters in the seventh with Cameron Maybin at first. Clippard’s high fastball just got wrecked over the left field wall, doubly impressive considering the 20+ mph wind coming in from left field.

Coming into the bottom of the seventh, the Nats were in need of some offense, and Josh Willingham answered the call, sending a 1-1 pitch to the exact same spot that Sanchez sent his in the top of the inning, putting the Nats back in the ballgame.

In the eighth, the Nats would load the bases: Desmond would get hit by Badenhop to start the inning, then a single by Guzman with a throwing error would move them to 2nd and 3rd, followed by an intentional walk of Ryan Zimmerman. Adam Dunn would step in, one out, with the bases loaded. This is the situation you dream about as a kid, team in need of a run, up to bat with the bases loaded. Of course, you don’t dream about taking one on the shoulder to get the winning run. But that’s just what happened, and the Nats went ahead 5-4. Clippard picked up the win as Matt Capps shut down the Fish in the 9th for his 12th save of the season. As I write this, the Nats are just half a game back of the 2nd place Mets, who are in extra innings against the Giants. If they lose, the Nats will share second, and if the Braves can come back against Philly, they’ll be just 2 games back of the division lead.

Tomorrow, the Nats send ace ¡Livan! Hernandez against the Fish’s Anibal Sanchez in a 1:35pm start.