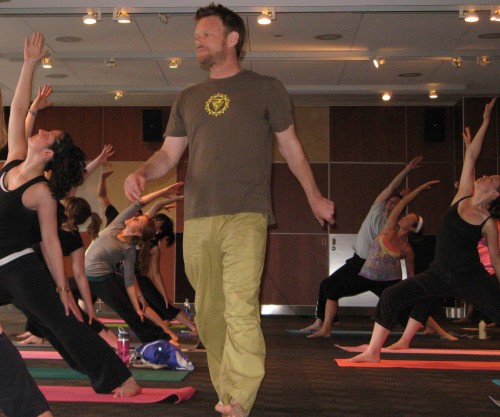 What Romanelli delivered was a time-out, a chance to stretch quietly after a busy week, lie on the floor, and really listen to him. His mission, he said, was simple: To help us slow down and savor life.

I don’t want to rush to judgment and say DC is a workaholic place, of course, but when I was waiting for the Metro last night, almost every person on the platform was looking down at an iPhone or Blackberry, reading and texting away. And they all had blank expressions on their faces. Romanelli referred to this behavior a couple of times during the yoga portion when, in between instructions to move to the next pose, he shared his philosophy.

He talked longingly about the days before cell phones, when we could wait in the checkout line (or in the subway) without texting or tweeting, when friends gathered together and were fully present with each other.

“There’s more to life than a text or a tweet,” he said. “Sight, sound, touch, and taste — these make life beautiful. Put down the cell phone and experience life.”

He also talked about the importance of taking things slowly. He shared a quote from Carlos Petrini, who founded the slow food movement: “Some experiences which are crucial to our maturity cannot be speeded up, and are only possible if they occur slowly.” Romanelli interpreted it in his own way: “If you rip off a bud, no flower will grow. Some things take time.” At the end of class, as we lay in savasana with our eyes closed, he came around with lavender oil from Sedona, Arizona, and smoothed it across our arms. It took time before he got to me in the last row, and that was fine. Already I could smell the oil, rich and sweet.

Romanelli began trying in the late 1990s to make yoga more accessible by expanding it beyond the studio, fusing it with tried-and-true indulgences such as chocolate and wine. He decided to try the foodie avenue when chefs emerged as rock stars. He’s currently on a nationwide tour that began in January and runs all year. He calls them “Jam Sessions” to convey that they’re experiments. True to form, each one is different, with different spaces and menus and levels of involvement from the chefs.

Romanelli set the stage for dinner during yoga, talking about the slow food movement, which honors unprocessed foods, meat from animals that are humanely raised, and meals that are enjoyed and eaten slowly, in the company of others. Indeed, our dinner included seasonal and local ingredients, such as the Rappahannock River oysters and veggies in our salad, the dandelion greens under our salmon, and the strawberry and rhubarb atop our pound cake streusel. And it was delicious — flavorful and fresh and light, just what you feel like eating after yoga. I’d expected Romanelli would keep talking throughout our dinner, explaining how this healthy food would nourish us and outlining the differences between it and conventional, factory-farmed fare. Initially, I was disappointed that after such a thoughtful class we were just going to sit and eat dinner.

But what happened was this. We were seated at tables of 10. I knew nobody, two girls to my right knew only each other, and the rest at our table were friends. Yet almost immediately, we all started talking, trading stories of yoga and cycling classes, places we’d lived and visited around the world, and so forth.

Instead of continuing to instruct us, Romanelli created a space where a group of friends and strangers could kick back and share, and have the kind of conversations he misses from the days before we became tethered to handheld electronic devices. After the dessert plates were cleared, most of us sat a bit longer, feeling no need to rush the event to a close. ‘On the Clock’
courtesy of ‘Sprezzatura Images’

Despite his commitment to slow food, yoga, and chucking his cell phone from time to time, Romanelli admitted that turning off the push to be productive and efficient is hard even for him.

I appreciate his honesty, and it makes me wonder. If life is a journey and not a destination, maybe striving to be present in the moment is the same way — if we balance our crazy workdays with “Jam Sessions” devoted to quiet yoga, tasty healthy food, and laughter with those we love or with people we may never see again, maybe that’s how we more fully experience life. Step by step, bit by bit, along the way.

Special thanks to Lindley Thornburg for inviting me to attend gratis.

2 thoughts on “Time Out: Yoga for Foodies”