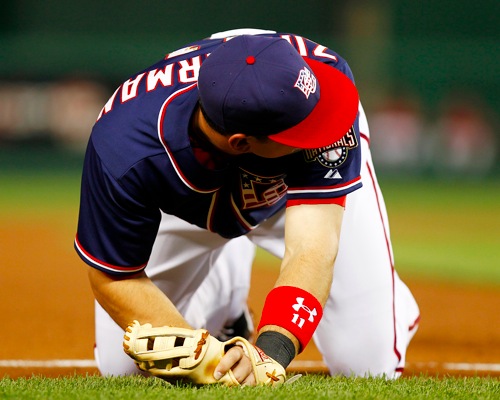 Photo by Max Cook special to We Love DC﻿

Normally, we wouldn’t run this as a feature, but my god man, look at these photos, I couldn’t dare squish them to 240px.

What a night. The Nationals rallied late, but the damage was long past done, and the team fell back to .500, losing 10-7 in a game that wasn’t as close as the score.  Luis Atilano went 4 1/3 and gave up 7 runs (6 earned), but his pitching wasn’t the only trouble.  After previous games, manager Jim Riggleman has said that the Nationals are making their mark as a team with defense and a team with pitching.  Tonight, the Nats had neither.  Even star Golden Glove third baseman Ryan Zimmerman came up empty in the sixth, tripping over his own feet  to prolong the already painful inning.

Tonight should’ve been a chance for the Nats to pull ahead, shore up their record, and head into the weekend Battle of the Beltways with the Orioles, but instead, they’re back to .500.  The Mets had a rough start to the night, as starting pitcher John Maine was pulled out of the game after just one batter.  Maine’s usual 90mph fastball was topping out around 82mph, and his form was definitely off.  The Mets pulled him as a precaution, bringing in Raul Valdes to fill in. 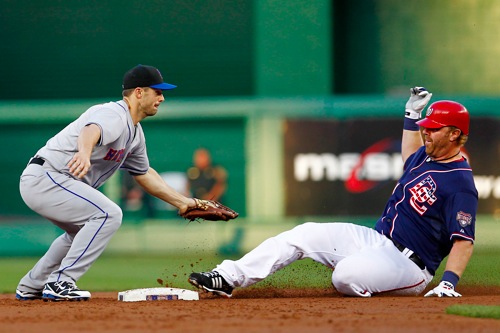 The Nationals pushed hard to rally, scoring three in the eighth before going down, and one in the ninth, and threatened offensively several times, but the Mets bullpen was able to stave off the threat adequately. The Nats have returned to .500 at 21-21, but go into a weekend series against the 13-29 Orioles for what should be, if the Nats can right themselves, a three game sweep. The Orioles offense has proved themselves unable to overcome their starting pitching failures, and I suspect that will not change as quickly as the Nats’ ability to focus and field the ball cleanly.

Atilano’s start last night will likely be his next to last, as of last night, he is the likely casualty in the order when Strasburg comes up around June 4th. Why June 4th? It’s the start of a homestand, meaning Strasburg would get two starts that homestand, and six of his first eight starting slots would be in the house of the Nationals. Strasburg’s minor league record is now officially too good to ignore, after his Wednesday night start where he struck out 9 in 6 1/3 IP, bringing him to some 40 strikeouts in six minor starts.

Notes: Our best wishes for a quick recover to Nationals owner Mark Lerner, who was participating in outfield fly ball drills in uniform before tonight’s game and caught one with his face. He left to get stitches. Adam Dunn’s first double was very nearly a single and a throwout. It looked, from my vantage point on the 1st base line, like he was out. Color yourself lucky, Mr. Dunn.