A humid Washington evening in the early days of summer is a bit of a difficult environment for baseball.  You never know when a storm will break out.  Tonight, the Royals were the recipients of a pair of storms: one from the Nationals’ bats, and the other from Mother Nature herself.  A 49-minute rain delay couldn’t shake Luis Atilano, who picked up his sixth win of the season in 5 1/3 innings.  Tyler Clippard and Matt Capps would do their eponymous routine on Clipp & Save T-shirt night here at Nats Park. 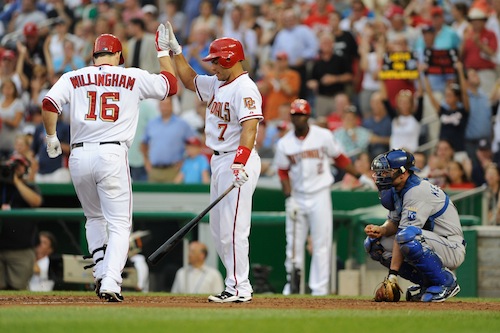 Atilano had an excellent outing before the storm, racking up 4 innings of three-hit scoreless ball against the Royals.  He found his pitches tonight, and mixed them well, according to manager Jim Riggleman.  He’d hit for first strikes against 12 of his first 15 batters, striking out five and walking none.  That’s the sort of outing you need from a young pitcher when the team’s struggling.  The storm would break up his outing, and the pitches that he threw in the delay would be ones that would come off his total at the end of the night. Atilano wasn’t quite as effective after the delay, losing his first pitch strikes, and he gave up a single to DeJesus in the 5th before getting the hook. Joel Peralta came on for the first time this season after an impressive record in Syracuse, and close out the troubled fifth inning on just four pitches.

And finally, the Nats had offense.  Nats’ hitters racked up eleven hits against shaky Royals pitching to break loose from their collective slump. In the third, Guzman would hit Lerew for a single, followed up by a Zimmerman double for a run.  In the fourth, they’d send 7 men to the plate for a pair of runs, including a homer from Josh Willingham and singles from Pudge, Bernadina and Kennedy. Willingham’s dinger to the third row behind the visitors’ bullpen was his 100th career deep drive. Adam Dunn’s 430-foot monster-shot to dead center field the following inning was a crushing blow to Lerew. Overall, seven players would collect hits for the Nationals, which is more than any other game this homestand by half.

After the game, when asked if these are the wins that the team needs before they hit a rougher patch of schedule, Jim Riggleman insisted that every night, they go out there with the intent to win, and that no one game is more or less important. The Nats have to keep this attitude going, as the sort of mathematics that take you from “we need a win tonight,” to “oh god, we really, really need a win tonight,” to “I don’t know what I’m going to do if we don’t win tonight,” can really take you downhill in a hurry. Fortunately, the Nationals bring Stephen Strasburg to bear tomorrow, which, given how the Royals have done against Luis Atilano and Livan Hernandez, is like using a cannon to squash a fly. We hope. Tomorrow at 4:35, we find out.

Notes: Tomorrow brings the return of Strasburg to the mound, and an early 4:35pm start for the Nationals before their off-day on Thursday…A crowd of 21,168 watched tonight’s matchup, significantly more than Monday’s game…Game time temperature today was 93°F, and is expected to be 95°F and up tomorrow for the early start…Capps’ save tonight was his 22nd, which leads the majors.