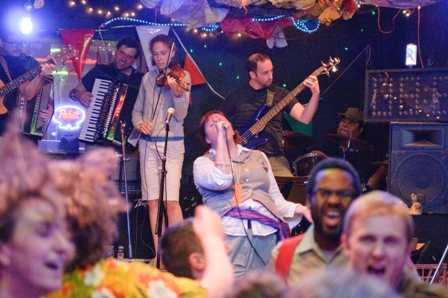 Now that you’re prepared for the preamble, what about the production itself? 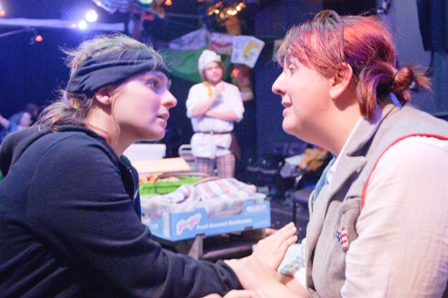 Eleven scenes and songs pull you through the experience of Courage, a wartime profiteer with three doomed children (this isn’t a spoiler, in true Brechtian style you’re told at the beginning when in the play they will die). Making a living out of war, Courage (played with fierce determination and damn fine pipes by Wyckham Avery) struggles to keep her children from being heroes and her precious cart of goods from being lost. From rugged Eilif who relishes the soldier’s life, to decent but dumb Swiss Cheese, to mute yet eloquent Kattrin – each one is challenged by war’s dilemnas and each one will be lost. Mitch Mattson, Jacob Yeh and Betsy Rosen perform these roles with the strong conviction necessary to make us care about their fates, and to feel culpable when Courage asks us, “why didn’t you help?”

Throughout the play, characters debate the culpability question without engaging in too much overt headbanging – Augie Praley as the Cook, the pragmatic survivor, Colin Hovde as the Chaplain, woefully in love, and Jessica Lefkow as Yvette, the prostitute veering comically from despair to hope. There’s not much of a plot per se – like in life, the characters face choices in situations with little choice left. We’re pulled along this journey by the ensemble, never letting us forget the play’s inevitable outcome or allowing us to veer too much into maudlin sympathy. That’s the Brechtian way and it works very well here, as actors constantly check in, reminding us what scene it is and who’s set to die when.

I’ve been to several productions at CHAW and always bemoan the cramped quarters of the black box – but the production design here is a revelation, using every bit of available space to create what’s in essence a junkyard. The decision by director Rachel Grossman to set the action in the round and the brilliantly chaotic design by Colin K. Bills releases the space like a sigh of joy for me – finally. It really works to have the audience and the actors so intermingled in action with this particular piece.

The music, a sort of East European punk rock hybrid, is a real stand-out, bringing the audience to their feet several times and weaving that revival tent atmosphere into something a bit hypnotic. At times I felt I wasn’t so much watching a theater performance as experiencing the character’s emotions. Maybe that was the beer. But these are hard questions being tackled in the midst of chaotic fun – what’s your personal responsibility in times of war? is it better to be a coward and live or to be brave and die? would you be able to deny your own child in order to survive?

No one knows how they would answer these questions truthfully until they live through those moments. Courage holds up that mirror and asks you to step through it, shattering the illusion of safety an audience normally feels. It shares that concept with Woolly Mammoth’s production of Full Circle last year, which took its cue from Brecht’s Caucasian Chalk Circle. dog & pony dc shows that the same bold vision can be achieved with significantly less money. There’s a hell of a lot of heart and hardly any pretension in this production – go join in tackling the hard questions, beer in hand.

3 thoughts on “We Love Arts: Courage”