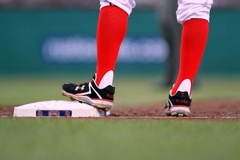 Tonight marked the halfway point for the Nationals’ season, and with a 35-46 record, a full ten game improvement over their 25-56 first half last year.  The bullpen tonight showed a bit of that ten game difference, with Joel Perralta, Sean Burnett, Miguel Batista and Doug Slaten combining for 5 2/3 of scoreless ball after starter Luis Atilano dug a 5-0 hole for the Nationals.  They’d scatter four hits in that span, and kept the Mets largely in check, hoping for an offense that would wake up.  In the ninth, they’d do just that. 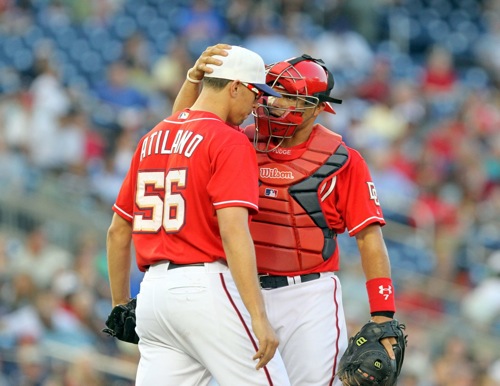 The ninth saw the arrival of Pedro Feliciano for the Mets who would strike out Adam Dunn on five pitches.  He would give way for Elmer Dessens, who’d been fairly unhittable, with a 0.61 ERA in 14+ innings of relief work. Zimmerman would draw a seven pitch walk, and Pudge Rodriguez would advance him to third on a double down the left field line.  With the score 5-1, it looked liked the Mets had things clearly in their favor, but with two runners in scoring position with two outs, the Mets brought in their closer, Francisco Rodriguez, to face pinch-hitter Roger Bernadina.

The Nats have had K-Rod’s number in their last few meetings, with the Nationals racking up a number of runs against the fireballer, and tonight was no exception.  Bernadina would smack a single to right on the third pitch, plating Zimmerman and moving Pudge to third.  Ian Desmond would strike a single straight up the middle to finish 2-4 on the night with an RBI, and suddenly, the Nats had two men in, two men on, and the winning run at the plate.  Willie Harris came in to pinch hit for pitcher Doug Slaten, and proceeded to take the count full.  And that’s when it happened.

What happened next isn’t exactly the way you ever want to end a ballgame.  There are all kinds of great ways to end a ballgame.  Walk off homer.  Called third strike from your closer with the bases full and the pennant on the line.  Sacrifice fly and a close call at the plate.  And then there’s what happened tonight.  Roger Bernadina got caught off second, and didn’t quite dive back fast enough.  The smooth toss to Tejada from K-Rod picked him off, and crushed the Nats’ late rally.  No one in the press box could remember a time when a pickoff had ended a game.

On a perfect summer evening, with low humidity and moderate temperatures, a crowd of 24,410 would come out for the second in a four game, holiday weekend series against the Mets.  While the Nats would go down early, they’d battle back to within striking distance before the end of the night.  The boisterous crowd, on their feet and looking for a win, was treated to literal fireworks instead of metaphorical ones.

In the first inning, Luis Atilano would find himself in a spot of trouble against the middle of the Mets’ order.  After hitting Ruben Tejada with a wayward fastball, David Wright would dribble a single between converging infielders Guzman and Desmond.  With runners at the corners, Ike Davis grounded a ball right to Guzman, perfect for an inning-ending double play, however, Guzman would drop the ball, and they’d end up with just one out.  Tejada would come in to score, there, giving the Mets a 1-0 lead.

In the fourth, the Mets would knock out Atilano, as if he’d been nibbled to death by ducks.  To start the inning, he’d give up a double to David Wright, and then a pair of walks to Ike Davis and Jason Bay, bringing out Steve McCatty to calm him down.  Atilano would get Barajas and Francoeur to fly out and line out respectively, and it looked like the young pitcher might work his way out of trouble.  It was not to be.  Alex Cora would triple off the scoreboard in right, a ball nearly caught by Morse, and that would pad the cushion to 4-0.  Jonathan Niese would double in Cora to finish off the day for Atilano.  He remains more lucky than good, and tonight, fortune wasn’t in his corner.  ﻿His line, 3 2/3 IP, 5ER on 4H, 4K, 2BB, isn’t indicative of the sort of performance that he had tonight. He pitched better than, with good command, and good presence.  The Mets just managed to wear him down.﻿

There were some rough moments for the Nats tonight that require some attention. In the first, Nyjer Morgan would break for second, and it looked like he’d beaten the tag, but his momentum, and the hard work of the Mets’ shortstop, pushed him right off second, costing the Nationals an opportunity to even the score early. Niese, striking our a career-high eight, may have had a career night, but the Nats weren’t doing much to stand in his way. In addition, the pickoff of Bernardina, which coach Jim Riggleman chalked up to “a learning experience,” felt like a punch in the gut. Baserunning mistakes cost the Nationals tonight, and not for the first time this season.

Tomorrow night, the Nats send out Stephen Strasburg for his sixth start in a 4:10 afternoon game. See you at the park.