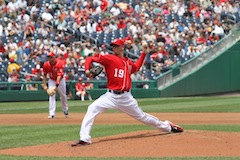 Scott Olsen returned to the mound for the Nationals on Thursday afternoon and pitched six solid innings of 2-run ball to notch his first win since May. Olsen had been struggling to the starting rotation after tightness in his shoulder would not abate after a start in late May. Today, none of that was evident, as the hurler would go six full, with velocity reaching the low 90s, which is impressive when you think that he came into Spring Training throwing in the low 80s. After the game, Manager Jim Riggleman would say of Olsen, “He looked good…he kept the ball down, confident with his pitches,” and that’s just what the Nationals needed when they continue to face problems in their starting five.

The Nationals brought the bats out today, notching a pair of runs in the 2nd and two more in the 4th. Ian Desmond finished the day 2-3 with a home run and two runs scored, and Adam Dunn further proved his trade value, going 2-4 with a double and a home run. With the trade deadline on Saturday, every run he bats in makes him more valuable. Currently in the trade mix appear to be the Rays and the White Sox, and Yankees scouts have been visible at Nats games this series. Buster Olney from ESPN is reporting that the Rays and Yankees are hovering but not actively engaged at this point.

As Olsen came in from the top of the sixth, the tarp went out onto the field as the storm descended on Nationals Park. Pouring rain, rumbling thunder and high winds were the order of the hour as most of the 30,263 headed not just for shelter, but the exits, as well. 92 minutes of rain delay would break up the game until just after 3:45 when the skies would clear. The Nats would add just one run in the 8th off Dunn’s homer, but Burnett, Storen and Capps would each pitch an inning scoreless ball to silence the Braves and claim the series victory.

The Nats Bullpen didn’t allow a single run this series against the Braves, providing 16 1/3 innings of scoreless ball. When you think of the historical problems with the bullpen for the franchise, this has been a very pleasant few weeks for the relief crew, who’ve been able to deliver excellent performance day after day. If only our starters or our bats were so consistent.

The Phillies come to town for three games starting tomorrow night when newly-acquired starter Roy Oswalt will face off against Craig Stammen. Detwiler starts for the Nats on Saturday night facing Joe Blanton and Sunday’s matchup has yet to be determined. Here’s hoping we get a few more Nats fans to drown out the vociferous yet craven Phillies fans.