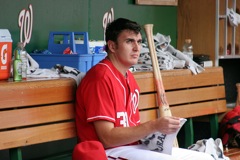 John Lannan took the mound Sunday with his career at a turning point. Lannan, the Opening Day Starter for the Nationals in 2010 and 2009, has struggled heavily this season. He went down to AA Harrisburg a few weeks back, and returned on Sunday to face the 2nd-place Phillies. It’s not a team that he has a strong track record against; he’s 0-7 lifetime against the Phils, and they hit him very well (.311/.388/.547) which seemed to indicate that he might not have the best day. In the end, the Nats would lose, but it wouldn’t be because Lannan buckled. 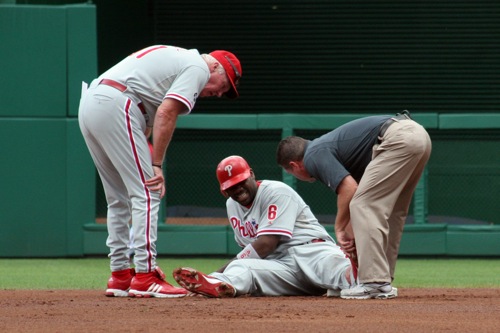 Instead, John Lannan battled the Phillies quite well, surrendering just 2 runs on 7 hits in 5IP. Not as deep as one might want Lannan to go, and there were some particularly scary moments, but overall, not so bad. The Post’s Adam Kilgore nailed it: “Watching Lannan’s start was like having a good day as a kindergarten teacher. Smooth, but constant worry things would spin out of control.” Meanwhile, the Nats would bring in a pair of runs in the 4th on an RBI double by Ryan Zimmerman, and then two more in the sixth off Adam Dunn’s 25th home run, a rifle shot into the upper deck at the right field foul pole.

Reliant on the bullpen after Lannan’s short outing, Miguel “Mr. Iowa” Batista would come on to add 1+. At first, he looked to be in the same form as when he went five full and stopped the Braves in their shoes, but in the 7th, he reverted to his earlier self. He gave up a six-pitch walk to Jimmy Rollins, and an RBI double to Placido Polanco before he came out. Joel Peralta did his best, but wasn’t able to prevent Polanco from coming around on the single from Ben Francisco.

The teams would remain deadlocked through nine, sending the game into extra innings. Drew Storen, who pitched the 9th for the Nats, retired the Phillies in order in the 10th, giving the offense a chance to complete the sweep. Nyjer Morgan would drop a perfect bunt toward third, and beat out the throw to give the Nats a shot at victory. Bernadina and pinch-hitter Willy Harris would move him over to third with two outs. Adam Dunn has a pretty atrocious record with runners in scoring position, and even worse when there’s two outs. Dunn is hitting just .091 (4 for 44) with 2 outs and runners at 2nd or 3rd. You can see what’s coming, and you can see how unpleasant it was. Swinging strike out on a forkball he just couldn’t track. It would’ve been ball three.

In the 11th, Collin Balester would come on to pitch, as Storen had been pinch hit for in the 10th. Balester, and his fantastic 1970s porno-stache, had a pretty rough outing. Valdez would start the inning with a bunt that Jim Riggleman would later call “nearly indefensible” and while he appeared to just edge in ahead of Valdez at the bag, the call went the other way. Much as had happened in the 10th, he’d be advanced over on a sacrifice bunt and a ground ball, and suddenly we had a runner at third with two out. Placido Polanco, though, decided to show Adam Dunn how these things are done, and stroked a single to center. Jayson Werth would pile on another run with a double to the left field wall to follow. While Balester would eventually get out of it, the damage was done, and Brad Lidge retired the Nationals in order in the 11th.

The Nationals finished the homestand 4-2, winning series against the first place and second place team in the Division. That’s the kind of baseball I want to see more of from this ballclub. This was an awesome little homestand, they were in each and every game, and they did it without the benefit of the phenom on which they’ve pinned their future. The Nats travel to Arizona and Los Angeles starting tomorrow before returning for another six-game homestand against Florida and Arizona.

Notes: Ryan Howard was injured in the first inning of today’s game. He was hit by a pitch and advanced to second on the RBI single by Ben Francisco. Getting back to the bag, he sprained his ankle fairly seriously, and according to Adam Kilgore was seen getting on the bus with crutches. X-rays taken on-site were negative on both his elbow and his ankle. After today’s game Atahualpa Severino was optioned back to Syracuse to make room for Justin Maxwell, who will fly west with the club this week.

2 thoughts on “Nats miss sweep, lose in extras to Phillies”