9:10 PM: It’s time to announce the winner and as Samuelsson praises Angelo I check out because he’s probably going to win.

9:11 PM: I wake up as Tiffany is announced the winner- makes total sense now that I remember those clips of her saying how she hasn’t won a challenge yet earlier in the episode.

9:12 PM: Advertisement for Going The Distance: a movie with another real-life couple of Barrymore and Long.

9:17 PM: Angelo’s turn to choose and he runs- not walk to the board and picks Japan. What a surprise.

9:18 PM: Stephen has Brazil but no idea about Brazilian cuisine. However he has been to a Brazilian steakhouse. So has my roommate- she was telling me she went to Fogo de Chao today. 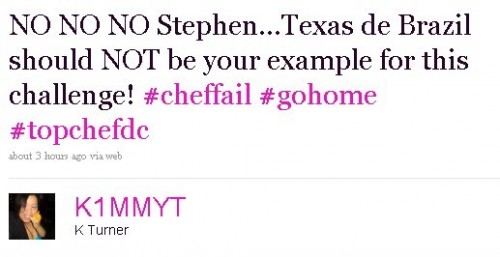 9:22 PM: Alex is clearly a spaz. The chefs don’t respect him and he apparently has no technique or manners. He’s probably who I would be if I was a contestant on Top Chef.

9:29 PM: The chefs arrive at the Meridian International Center for the event.

9:32 PM: Jose Andres is a guest judge and is well know to DC as the man behind such places as Minibar, Jaleo, Zaytinya, Oyamel, and Café Atlántico.

9:35 PM: Why did you cut to a Swedish National to talk about the Stephen’s Brazilian dish?

9:37 PM: Again, why cut to a Bahama National to talk about the Mexican dish? Good to see they were able to really get each country’s representatives in the house.

9:42 PM: Angelo is a prankster… and also 12 years old. In a scene back at the house he covers the toilet with saran wrap.

9:47PM: At the Judge’s table Tiffany, Kelly, and Kevin are the best of the night in the end Tiffany gets the big win and ends the day 2 for 2. As a reward she receives $10,000 which surprises Jose Andres almost as much as Tiffany. The show will also make a matching donation to DC Central Kitchen but Tiffany appears to be freaking out about her own cash prize to notice.

9:58 PM: Ed, Stephen, and Alex are the bottom three this week. As much as we’d like to see Alex leave the producers need us to rag on him some more- and Stephen goes home packing. 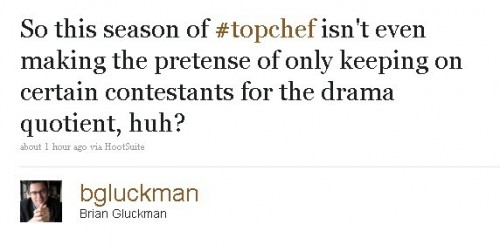 4 thoughts on “We Love DC Does Top Chef DC: Episode 8”