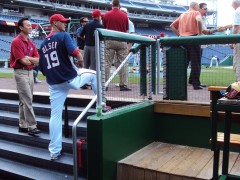 Scott Olsen’s contract incentives couldn’t have kicked in at a better time for the young left-hander. Olsen gave up 8 hits over 1 1/3 innings, which ties his June 30, 2005 outing for the shortest of his career. Sound familiar?

That’s because Stephen Strasburg had the shortest outing of his career (albeit this his rookie season) Tuesday night, but here’s the difference – Olsen’s 11th start of the season Wednesday triggered an additional $250,000 pay day for both his 11th (which Wednesday night) and 12th starts. He will continue to cash in an additional $100,000 all starts beyond that time until the end of the season.

That means Olsen might have had a bad night on the mound and Nats fans might not be happy with the outcome, but Olsen still gets paid quite a hefty sum.

Money aside, the game was the second in a series that the Florida Marlins lineup and pitching staff has proven their dominance over the 2010 Nationals.  The fish struck out ten times last night compared to the Nats striking out six times overall, but those Marlins can hit and hit it hard.

Mike Stanton is no exception. In fact, he’s the rule. Stanton went 5-for-5 making the Nats pitching staff look like the David to his Goliath with two doubles, a home run, and four RBI’s – which was a career high for hits in a game.

The Marlins’ only lefty, Logan Morrison, scored three runs, and everyone except their 7-8-9 guys tallied up runs on the night.

“I thought we played the game with great effort. Played hard, ran the bases hard, we hit the ball well. [We] were down a lot of runs battling back, had a couple chances [in there],” Manager Jim Riggleman said.

The Nats did hit the ball last night. They hit for ground or pop outs over 15 times, hitting Florida’s Chris Volstad all night. Problem was they didn’t come up with runs early, which led to them having to overcome a 7 run deficit starting in the second.

“I can’t say that it wasn’t a well played game,” Riggleman said. “I think they played with great effort and intensity and that’s what we ask from our players and we’ve been getting that every night.”

Unfortunately for the Nats, great effort and intensity didn’t win the ballgame. Washington came back to rally a bit, closing the deficit to a 9-5 loss by the end.

Ian Desmond, who now has 27 errors which is 10 more than anybody in the Major Leagues, had his first multi-homer game of his career having gone long twice.

Dunn snapped an 0-for-13 skid with a single and solo home run in the fifth in the three spot, while Ryan Zimmerman went 3-for-3 as well.

Josh Willingham had the night off after admitting he was playing through a knee injury since the All-Star break earlier on Tuesday, but came in to pinch hit. He hit a first pitch double, but didn’t score (Note: Jason Marquis came in to pinch run from second. Then, the inning ended.).

Thursday is the final night of the series and Livan Hernandez needs to get some momentum going for the weekend. He will pitch tonight at Nationals Park against Rick Nolasco starting at 7:05 (pending severe thunderstorms).

2 thoughts on “Olsen Gets Paid, Can’t Fry the Fish”