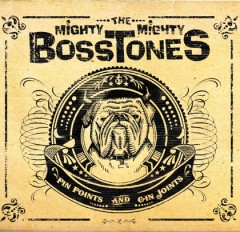 Ska weekend has arrived, DC: We have the Mighty Mighty Bosstones tomorrow night and the English Beat on Sunday. Somewhere, a sad trombone is perking itself up, polishing off a decade’s worth of dust, pulling the two-tones out of the closet, fitting itself for a new plaid suit, and getting ready to have some fun. (And a couple of you lucky dogs will be hitting up those shows courtesy of We Love DCs Winning Ticket giveaways. Congrats!)

Consider this your Friday reminder that it is your constitutional responsibility as Americans to have as much fun as possible on the weekend. And frankly, I can’t think of a better way to spend a weekend night than with the Bosstones–a statement that is as true now as it was in 1994, when I was in 9th grade stealing my big brother’s CDs.

Dicky and the crew grew up in Boston’s hardcore scene in the ’80s, learning how to rock hard and with a serious punk edge. But it was in the ’90s that they learned how to have some serious fun, mixing in the trombones, putting on some new suits and practically inventing the ska-core genre that exploded in the mid-’90s. The Bosstones created and rode that wave better than anyone else, turning life into a gin-infused party that you just had to join. Heck, even their breakup songs make me want to grab a drink and party. And party I will on Saturday night, when I finally–FINALLY–get a taste of the legendary live Bosstones experience. It’s not for nothin’ that their live shows came to be called Throwdowns. The Bosstones throw it all out on that stage, and they make sure the crowd does, too.

Need a taste of what you’re in store for? Need convincing that the night will, indeed, be one big party? Allow YouTube to oblige: here, here, and here. (That last one is a special treat–Dicky’s taken off the suit jacket and is dripping buckets of sweat, and I’m pretty sure I’ve never seen him happier.)

$25 is a steal for this much fun. But wait, there’s more! That $25 also gets you in to hear Teenage Bottlerocket, a pop-punk band out of Wyoming, and The Flatliners, a Canadian ska-core band.