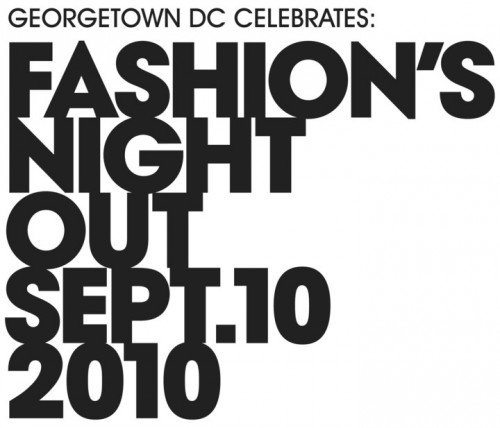 One cannot shake a blog, magazine, or twitter this week without hitting some kind of coverage of Fashion’s Night Out. The event, now in its second year, was launched by the Council of Fashion Designers of America and Vogue Magazine occurs this year on Friday, September 10th, from 6 to 11 pm. The well-intentioned – if just a bit self-serving – folks behind FNO imagine it as a response to the recession which supports independent fashion designers, boutique owners, and downtown commercial districts, while making the average person feel good about shopping and stimulating the economy.

Originally focused in New York City, this year the events have spread out – and include festivities here in DC. The principal neighborhoods organizing to participate are MidCity and Georgetown. While there is certainly plenty for the lady, it should not be overlooked that many participating businesses do cater to those in the male way. Therefore, to make this an inclusive event, I present to you…

DC Men I Know and Where They Should Go for FNO:

Boy: College-Age Little Brother Who Hangs Out At U Street Music Hall and Is Definitely Going to Get His Backpacky Hip-Hop Label Off the Ground as Soon as He Graduates
Store: Palace 5ive
The skate lifestyle shop will be showcasing fall clothes from the lines you expect – Durkl, The Hundreds, Vans, and the like – along with vintage sunglasses and the shop’s popular sneaker collection. Sticky Rice will be providing sushi and beer to shoppers. The kid can ogle the skate decks in the lovely exposed-brick-walled shop, drink a beer, and buy a tee shirt to wear to Saturday’s Nouveau Riche.

Boy: Man Who Can Be Lured Anywhere By Whiskey (and Maybe a Shoe Shine)
Stores: Lost Boys and Rue 14
I can not be the only one who shops better after drinking, and apparently Lost Boys and Rue 14 are on to us. Both shops are luring patrons with tastings throughout the evening. Rue 14 will have the distiller of Virginia-based Wasmund’s Whiskey on site, pouring to the tunes of a DJ who moonlights in the band US Royalty. Not to be outdone, Georgetown’s Lost Boys is offering what I think might be the only promotion that gets Tom Bridge into a boutique on Friday night – bourbon and fancy-man barber shaves. I wonder how bourbon pairs with free cupcakes.

Boy: Adorable Architect Boyfriend Who Loves The New Yorker and Put This On
Stores: J.Crew, Georgetown Optician, Presse Books
Since this guy was probably going to stop by J.Crew for a snuggly sweater – or really anything with elbow patches – the shop is making it easier by offering complimentary assistance by their staff of personal shoppers all night. Early birds who spend over $150 will also get a gift. Georgetown Optician is hosting an Oliver Peoples trunk show, offering the chance to try on the latest frames from the L.A.-based brand (eyeglasses I personally wear and love). Over at Presse Books they will be doing a bit of good for the world, both by donating a portion of proceeds to Action Against Hunger, and by giving shoppers a spot to hide if too many packs of “Sex and the City” clones wear one down.

Boy: Seriously Preppy Bro Who Was Actually Just in Georgetown Anyway
Stores: Vineyard Vines and Lacoste
Once the confusion about the stores being open late is cleared, he can head to Vineyard Vines where he can have a drink and, if he decides to pick up some madras or Nantucket red pants, 10% will be donated to charity. At Lacoste, he can play Wii tennis, which, because I am feeling generous, I will assume is ironic. Like the pants.

This is by no means all the options for men available on FNO – so interested parties should definitely check with the two organizing committees for more details.