This deep into the season, a motivational or even constructive post-game spiel from a manager or coach isn’t going to turn a team’s season around – especially a team who’s been out of contention for months. That means it’s up to the players themselves to make a 180 in attitude.

Yesterday’s 6-5 loss to the Florida Marlins wasn’t the prime point of concern but rather a tipping point for Riggleman. The Nats defense was sloppy. They were charged with two errors on the loss but it should have been three. Ian Desmond continues to rack up missed plays at a rate faster than anyone else in Major League Baseball this season. Adam Dunn is no stone wall at first. Balls get by him just as often as Desmond misses a routine ground ball. Starter Jordan Zimmermann sailed a pick off throw from second base to center field. This is not acceptable at the major league level.

The hot-hitting Florida rookie Mike Stanton let it rip against the Nationals, continuing his consecutive games hit-streak to seven. Stanton had his second career multi-homer game in Washington. The first was August 13 at Cincinnati.

Ivan “Pudge” Rodriguez gave the rookie a run for his money in the fifth inning though when Pudge charged the base path between first and second. Pudge completed a rundown pick off play after running all the way from home plate to the base path during a Cameron Maybin at-bat.  If there were any good example on the team defense-wise to look to it would have to be Pudge for that play alone. 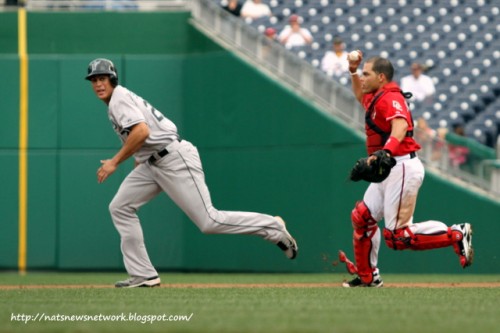 The core of the Nationals’ issues besides an obvious slump in energy is defense and fundamentals.

Riggleman and his coaching staff made it clear to their players that it’s a 162-game schedule of nine-inning games that they signed up for, so they better all get on the same page and keep on playing hard if they ever want to amount to something more than consecutive seasons consisting of 100 plus losses.

“It’s still only my fourth start,” Zimmermann told reporters after the game. “I’m still trying to work some kinks out. It’s unacceptable, I guess, to be up here and not have the good control like I should have.”

The Nats have a chance to regain some end-of-season momentum on their road trip to Atlanta, which starts tonight at 7:10 in Georgia, and continues in Philadelphia before the final homestand of the season starting Monday, September 20.

“I think the losing wears on you,” Riggleman said, “but, you know, it’s a 162-game schedule, it’s a nine-inning ball game.  That’s what you signed up for, that’s what you give.  Until we get 25 guys up until September 1, and then whatever we have, 32, after that — until we get everybody on the same page, that it takes a great effort every day to get out of where we are, it’s not gonna happen.”

“You cannot go to the level that teams such as the Padres, Giants, Yankees, Tampa Bay, those teams who are gonna be right there at the end,” Riggleman said. “You cannot be in the same class with them until you have everybody on board, pulling the same way, and putting personal statistics behind them, and milestones behind them and all that nonsense.”