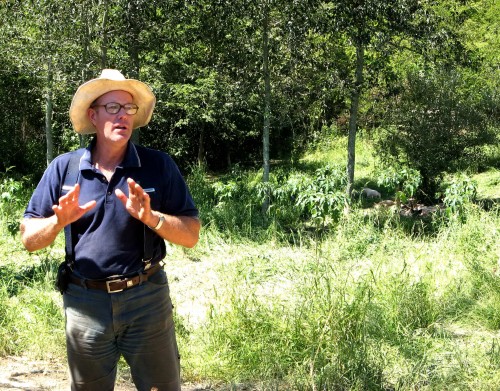 Joel Salatin of Polyface Farm, and his pigs

If you’ve been to some of DC’s restaurants that tout local fare, or if you’ve read The Omnivore’s Dilemma or seen Food Inc., chances are you’ve heard of Polyface Farm and its charismatic leader, farmer Joel Salatin.

Go to the farm’s Web site, and you’ll see that “Polyface, Inc. is a family owned, multi-generational, pasture-based, beyond organic, local-market farm and informational outreach in Virginia’s Shenandoah Valley.”

These are all very good things, in my opinion—and it lets you know, if you don’t already, that you’ll get a lot of adjectives from Salatin. So a friend and I recently took a day’s journey to Swoope, Virginia, to check out the wonders of Polyface for ourselves.

Let’s start out with what Polyface Farm isn’t. It isn’t a Concentrated Animal Feeding Operation (CAFO), which is how much meat and poultry is grown in the United States—one source says more than 99 percent.

CAFOs are an efficient method of growing a lot of meat quickly, cheaply. Or at least the end product is affordable—costs to the environment, human health and animal quality of life in the conventional food system aren’t entered into that equation. 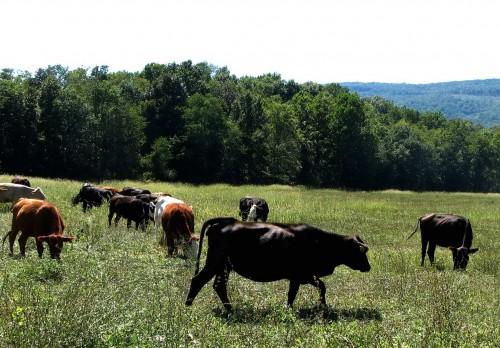 Beef on the move

When I think of a CAFO, I think of a thick black dot—thousands of animals crammed into a small area, vast quantities of antibiotic-laced corn to fatten the herd and prevent disease from spreading through the crowd, deep layers of dung underfoot, and deep blue funk for the animals.

Polyface is pretty much the opposite.

My visual there is a wide circle. The entire farm spans about 100 acres, and the impression is much more of grass than of animals. Many pastures look completely empty. The animals don’t stay in one spot long; they are moved from field to field to field before they have a chance to tromp it down to dirt. This means the animals walk on and eat grass, not commercial feed that can include protein derived from things such as chicken manure, or dead cows.

The whole system is built to mirror nature—the symbiotic relationships the animals and plants might have naturally. 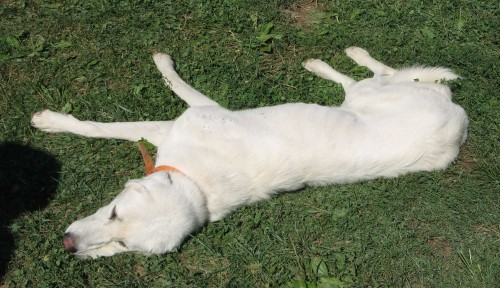 Take the rotation of the fields, for example.

The cows, said Salatin, like three things—to be moving, mowing, and mobbed up. So every day he moves 120 head of cattle to a new half-acre of pasture where they can eat fresh grass and stick together for predator control. They do what cows do—they loll, they graze, they moo, they make cow pies. The next day, with the grass mowed and fertilized, Salatin moves them to another field. 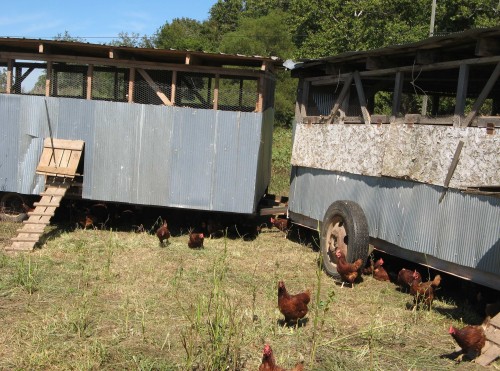 Then he rolls the Eggmobile into the first pasture. The Eggmobile is a chicken coop on wheels, a Winnebago for the feathered crowd. Its passengers disembark, and the hens clean up, sanitizing the field by scratching around the cow pies, gobbling down insects and larvae, and adding some fertilizer of their own for the next crop of grass. The chickens and the cows have a symbiotic relationship like the egret and the buffalo, said Salatin. 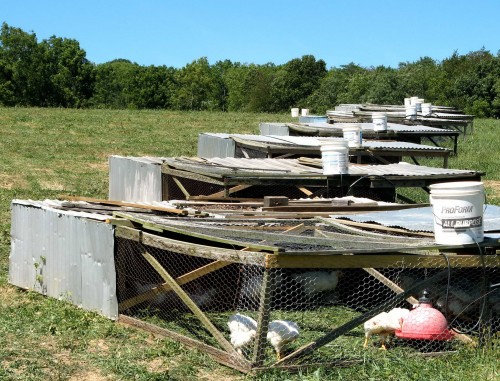 Other flocks of Polyface chickens stay on the move, too. The pastured broilers, raised for meat, live in little portable pens where they can get some shade, some sun. Every morning at daybreak, when the grass is dewy and most palatable, said Salatin, the pens are moved to new spots. It’s a simple, no-tech process: one of the workers grabs a handle and slides the pen to a new spot in the grass, and the chickens walk along inside the pen to their new location.

Also in the rotation are turkeys, which live up to their name. Salatin says every day they wake up to try to find “a new and creative way to die.” To keep them from doing so, he enlists some savvy hens to live among them and teach the young turkeys the ins and outs of being a bird. They peck around in a grassy area enclosed by a fence of netting, with a shelter on wheels parked in the middle. Every few days, the whole operation moves to a new location.

The rotation of the fields, then, looks something like this. The field the broilers and turkeys were in the day of our visit has been grazed by cows and cleaned by the Eggmobile’s residents twice this year. Grass has grown and hay has been cut, then the pasture grazed again. Broilers and turkeys are using it now, and it may be grazed again this fall. 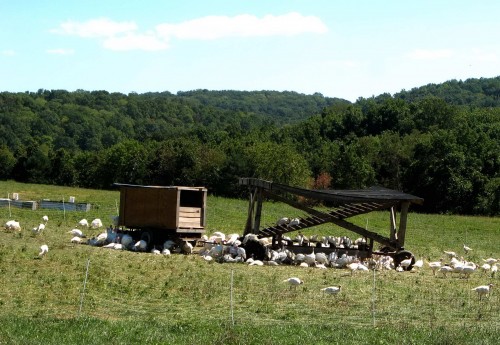 The grass, which Salatin called “the lungs of the earth,” is becoming more and more healthy as it receives these periodic disturbances from the animals, followed by long rests. So it stays ready to support the animals.

This circular process means the income from this plot of land stacks up – it can yield a high potential per acre, said Salatin, and can make a good successional business for a family of farmers. All with low pathogens, and without the chemicals Salatin’s father called a drug trip, because more and more are needed each year to keep up.

Polyface Farm has other practices born of plain ol’ common sense, too. Water comes from ponds built in high spots on the farm and lowered through pipes by gravity, not pumps.

The pigs rotate from paddock to paddock until they reach about 250 pounds, and then they are moved into the woods where they eat acorns and other tasties off the forest floor. You’ll find no “cardboard pigs with big rear ends and skinny middles” at Polyface, said Salatin—they don’t do well in the woods. You don’t get “the other white meat” either, because these pigs thrive on exercise and nutrient-rich food and have “color indicative of the vibrance of life.”

There’s yet another benefit of this approach: the olfactory one. Polyface Farm is “aesthetically and aromatically pleasant,” said Salatin. “If that principle were followed everywhere, it would revolutionize American farming.” 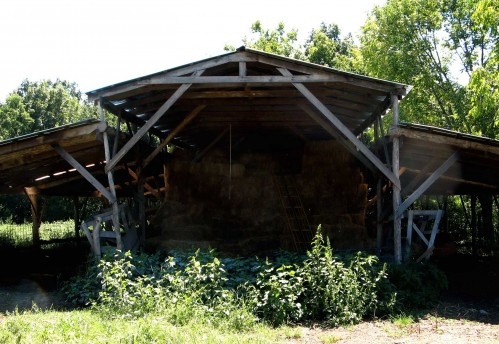 Barn made famous in The Omnivore's Dilemma

Care to see it for yourself?

You can see Polyface for the low, low price of $10.50 for a two-hour Lunatic Tour. But you need to plan ahead. There are only 100 seats on the hay wagon, and they sell out months in advance. We reserved our September tickets in May, when only a handful were left.

Plan on driving two and one-half to three hours from the DC area, through Virginia’s scenic Shenandoah Valley.

Just the ride can be a bit of an adventure—100 people perched on the hay bales in the center of the flat wooden wagons or hanging their legs off the side, bouncing and holding on as the tractor pulls them across the fields and dirt roads of rural Virginia. Salatin invites any who wish to get some exercise to walk behind the wagon, so a ragtag army trails along behind.

It’s definitely worth the walk—and the ride.